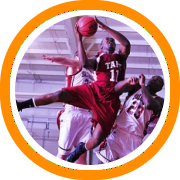 Taft post-graduate Chris Evans was named the Most Valuable Player of the Western New England Conference this weekend.  Evans has averaged 22 points, 8 rebounds, and 4 assists this season while leading Taft to an overall record of 17-7 and the top seed in the upcoming Western New England tournament.  Evans was also named an All New England performer in football this fall.  The Stamford, Connecticut native signed a National Letter of Intent this November to play his college basketball at Sacred Heart.