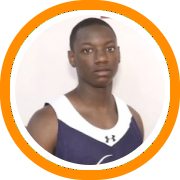 AAU and grassroots programs will be spread from Providence to Philadelphia to Virginia this weekend for the second, and final, weekend of the April live period.  With that in mind, here’s one last look back at some of the guys who helped themselves the most in weekend one of the live period.

Kaleb Joseph, Rivals – His name was all over national headlines as every media outlet from ESPN to Scout to Rivals was declaring him a sure high-major after his performance in Las Vegas.

Rene Castro, BABC – It doesn’t get much more efficient than the numbers Castro put up at session I of the Nike EYBL as BABC got off to a 2-2 start against arguably the toughest schedule in the field.

Jarred Reuter, New England Playaz – He landed his latest high profile offer from Florida while also generating interest from the likes of Kansas and Duke and earning an invitation to Adidas Nations.

Kahlil Dukes, CBC – He was clearly a prospect on the rise at the Northeast Hoops Festival and his trip to Vegas was a productive one as he walked away with his first high-major scholarship offer from USC.

Abdul-Malik Abu, Expressions – His high-major following increased by the game in Pittsburgh and it appears to be the start of something big as Abu is nothing but a high-major prospect at this point.

Samuel Dingba, Westchester Hawks – He was his typical dominant defensive self last weekend in Pitt while showing off more offensive assertiveness inside the paint & coaches came in packs to watch.

Josh Sharma, Rivals – His first scholarship offer from Lehigh will surely be a memorable one, but that’s undoubtedly going to be just the tip of the iceberg after the name he made for himself out west.

Alec Brennan, Expressions – Iowa State became the first high-major school to offer Brennan a scholarship as he stepped up in Expressions’ run to the Pitt Jam Fest semifinals.