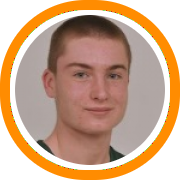 The Mansfield star will head north to New Hampshire to play for Merrimack in the NE-10. The skilled six-foot-six forward should be a good fit in the division II league given his good size and shooting range.

He's had a storied career at Mansfield, helping the Hornets to a period of almost unprecedented success in that time with an overall record of 70-9. It was a trip to the state championship game in his sophomore year, followed by a spot in the D1 South semifinals last year as a junior and then the D1 South finals this past season.

Boulter hasn't only been a consistent contributor the entire time, but seen his role grow with each passing year as well. He averaged 23 points and 6 rebounds a game this season while shooting 44 percent from the three-point line and finished with over 1300 points in his three year career. He was named MVP of the Hockomock League, 2nd team All-State by ESPN Boston, All-Scholastic Herald Team by the Boston Heraldn and All-Scholastic Super Team by the Boston Globe.

Robinson Going to JUCO in Texas

Durfee forward Tyree Robinson was the most dominant interior presence in the MIAA this season averaging 26 points, 14 rebounds, 6 blocks and 3 steals per game. He began his career at Putnam Science in Connecticut but has spent the last two years at Durfee, and came within 50 points of scoring 1000 points during that two year span. He was named 1st team All-State by ESPN Boston, All-Scholastic Dream Team by the Boston Herald and All-Scholastic Super Team by the Boston Globe.

Next year he'll head to Odessa College in Texas, one of the nation's premier junior college programs, and follow in the footsteps of one of his former BABC teammates Jaylen Brantley, who is currently in the midst of his second year at the school and on his way to Maryland next season.

While Robinson is only six-foot-three, he is an incredible athlete with an even better motor and has consequently been able to thrive inside the paint, not just in the MIAA but also on the EYBL circuit where he was often giving up five or more inches.

Another BABC product, Aamahne Santos is also JUCO bound, as he'll attend Cloud County Community College in Kansas. The five-foot-nine point guard didn't play for Catholic Memorial this year, but was one of the MIAA's best in the 2013-2014 season and backed that up with a strong season in the EYBL as his role continued to grow throughout the season.

A true point guard who can run the team, distribute the ball and make open shots, Santos was receiving consistent division I recruitment before it became clear that he would be heading to a junior college first.