Washington Back on the Board 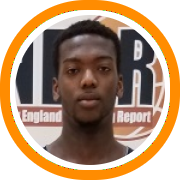 Just as the class of 2018 is beginning to dry up, one name has come back on the board as Travell Washington has de-committed from Pepperdine according to Lawrence Academy head coach Kevin Wiercinski.

Washington, a 6-foot-9 native of California, announced his commitment to return to the west coast in late March, shortly after he went home for spring break and Lorenzo Romar was named the program's new head coach.

While the reasons for Washington's most recent decision are not yet known, there are still plenty of division I schools looking to add late size to their 2018 recruiting class. The Lawrence Academy big man has a high ceiling as well given his agility, athleticism, and skill set.

He joins the Putnam Science duo of Osun Osunniyi and Josh Mballa, Williston Northampton's Filip Rebraca, Phillip Exeter's Toni Rocak, and Trinity Catholic's Cantavio Dutreil as some of the best available big men still on the board.