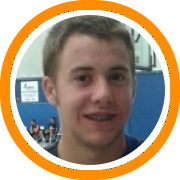 Staying on top is often times harder than rising to the top and that's why the continued success of the top three sophomores in the state of Vermont is so impressive.

Matt St. Amour is the state's highest ranked player after a series of strong performances this summer, most notably at the Vermont College Showcase.  St. Armour is a skilled guard with a strong feel for the game and a particularly lethal three-point shot.  He put up big numbers in his freshman season at Missisquoi and is expected to do only more of the same in his encore performance.

Marcus Willingham checks in at number two on the list.  A six-foot-four power forward who can be a man among boys when it comes to local Vermont competition, Willingham will need to continue to extend his skill set to the perimeter in order to maintain his spot moving forward.

Rounding out the top three is Willingham's running mate at Rice, Casey Tipson.  A steady and dependable point guard with a good skill set, high basketball I.Q., and gritty demeanor, Tipson comes from good stock and can be equally effective playing either guard position.

Just on the outside looking in of the Vermont rankings are Tre Pratt-Hysell and Josh Claflin, two more talented guards in the class of 2013.  Pratt-Hysell is a power guard who gets into the lane and finishes plays while Claflin relies on his blinding speed to get things done in transition.