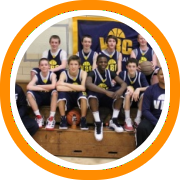 The 14U VBC AAU team traveled down to Maryland last week to take part in the 17th Annual MIT tournament held in Baltimore and enjoyed much success. VBC went 4-2 facing teams from New Jersey, Virginia, Maryland, and Pennsylvania, and was praised as one of the most hard working and unselfish teams in the field.

After going 2-1 in pool play, they defeated teams from New Jersey and Philadelphia to reach the Final Four. Coach Julian Taylor’s great run ended there however, as they went up against one of the nation’s premier programs, and the tournament’s eventual champions, DC Assault.

VBC was led by 6’1 Shooting Guard, Saul Phiri (Haverhill, MA) who averaged 24 points and 12 rebounds throughout the weekend. Saul amazed scouts with a 33-point performance on Saturday and again with another 29 point performance on Sunday in the Quarterfinals. After these great performances Saul was invited to participate in the Five-Star Junior Prospect Showcase in Baltimore, Maryland this spring.

Also standing out for VBC was big man Ross Carter (Sudbury, MA) who averaged a double-double, displaying great touch around the rim.

Forwards Nick Tupanjanin (Dover, MA) and James Mortimer (Sudbury, MA) are great swingmen that excelled in the open court, slashing to the rim, while also showing the ability to knock down jump shots while being contested.