Under the Radar Standouts 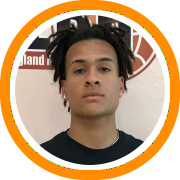 It was little over one month ago that the Northeast Hoops Festival assembled all of the top teams in the northeast for the region's premier tune-up. Two weeks of live period action followed close behind and there's been more good basketball in early May.

Leading up to next weekend's Memorial Day Super 16 Showcase, NERR will take the better part of the next ten days to examine the players who may not have earned the highest or most scholarship offers, but have nonetheless seized the opportunity to shine over the course of the last five weeks and consequently deserve their due credit as well.

The majority of that coverage will focus on players who do not play on sneaker sponsored teams. Up first though, is a look at one player from each of New England's five  sponsored programs, who may still be a little under-the-radar but has nonetheless raised the level of their game to prove their worth on the national level.

Moses Flowers, Team New England - Flowers was still out with injury at the Northeast Hoops Festival and not expected back in the line-up in time for the first weekend of the live period. He not only proved to be ahead of schedule but didn't have an ounce of rust on him as he was as shredded and athletic as ever while demonstrating a much improved skill set. Flowers has transformed himself from an undersized athletic wing a year ago to a true guard who is now handling the ball more, knocking down an incredible 55% of his attempts from downtown (and 72% from the stripe), while continuing to be a lockdown defender.

Darion Jordan-Thomas, BABC - An undersized but bouncy big man, Jordan-Thomas has been a model of efficiency for BABC this spring. He's shooting an astounding 89% from the floor, having converted on 65 of his 73 field goal attempts to date. They're not all just easy finishes either as he's shown footwork in the block and some impressive moves with his back to the basket along with a capable stroke out to the mid-range area. Combine that with the fact that he is the team's leading rebounder at 6.2/game and pound-for-pound one of the best offensive rebounders in the EYBL and you have someone who has definitely increased his profile.

Joe Pridgen, Expressions Elite - He may not fit into any conventional positions but history has shown that if you can make an impact in the EYBL then you can make an impact at the next level. Pridgen has done that and more while sparking Expressions' 8-4 start. He's averaged over 8 points and 5 rebounds per game while connecting on 57% of his field goal attempts. More impressive though is the fact that he's doing it while often matched-up with players three or four inches taller. He's made plays around the rim and in the open floor alike while bringing a toughness, motor, and mentality that can't be measured by feet and inches.

Joey Reilly, NE6 - If there were questions about how he could impact the game versus national caliber competition, they've been answered at this point. Whatever Reilly may lack in size he has more than compensated for with skill, energy, and consistency. He's shot 48% from behind the three point line while knocking down an average of two threes per game and increasing the quickness of his release as he adapts to the level of competition. He's also shooting 50% from the floor and 80% from the free-throw line. Reilly's value eclipses the numbers though as he's an "everyday guy" who brings it on both ends every time he steps on the floor and never lacks a sense of urgency.

Marty Silvera, Mass Rivals - Coming off a big junior season at Doherty High School in Worcester, Silvera came into the grassroots season in notably better shape than he left it last summer. With his improved conditioning and constant skill, he's emerged as perhaps the most consistent floor general option for the Rivals this spring. He leads the team in assists, has a 2:1 assist-to-turnover ration with no more than 2 turnovers in any game this spring, and has knocked down 40% of his shots from behind the arc. Mid-way through the live period he also announced that he would head to Putnam Science and reclassify to 2020. That news was met by an immediate offer from Iona College.