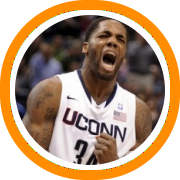 The transfer bug is an epidemic that is striking college basketball with unprecedented frequency this year as close to 250 players are looking for new homes at the division I level.

Among those 250 players are some of the best prospects to come out of New England in recent years as guys like Alex Oriakhi, Carson Desrosiers, Evan Smotrycz, Gerard Coleman, and many more are reportedly on the move.

Oriakhi will have only one year of eligibility remaining after spending the last three years at UConn, but he may be able to play right away if the Huskies aren’t able to overturn an NCAA ruling that would prevent them from being eligible for post-season play next season.

Former Central Catholic big man Carson Desrosiers visited Providence College from Thursday to Saturday of this weekend.   The Boston Herald reported on Thursday that Desrosiers would choose from among Providence, UMass, and Oregon State but the current Wake Forest transfer tweeted “Not my final 3, still open”.  Vanderbilt also appears to be in the mix after traveling to Wake Forest’s campus to meet with Desrosiers earlier in the week.

Desrosiers’ former Mass Rivals teammate Evan Smotrycz is another on the move following his two seasons at the University of Michigan.  The six-foot-eight forward hosted Maryland’s coaching staff for an in-home visit, Xavier on Saturday, and was expecting to host Providence head coach Ed Cooley on Sunday.  Colorado, Baylor, Clemson, and Kansas State are the other schools on his list.

As for Coleman, Providence College released a statement on Wednesday confirming previous reports that Coleman would in fact be leaving the program.  The Tilton alum and West Roxbury native has yet to release any type of list but is expected to attract a wide range of high-major suitors.  Coleman’s former BABC counterpart Ron Giplaye is also reportedly transferring out of the Friars program.