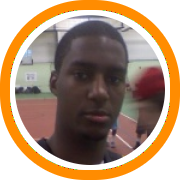 Like every all-star game, tonight’s contest was an up and down affair. A number of players stood out in the group—some of whom you may have expected, some of whom may surprise you.

Jason Pierre- He asserted himself from the opening tip as one of the elite guards on the court. In the early going, he had a dunk in transition and a three in the half court. Over the course of the game, he made several impressive drives to the hoop and finished plays with contact. With his athleticism, handle, and beautiful stroke, Pierre has been phenomenal this week, and tonight was no different.

Craig Marriro- Marriro is a beast of a guard and is difficult to contain off the bounce. When he gets in the lane he is fearless, as he willingly accepts contact before finishing. In the game, he exploded to the basket several times. Altogether, the unsigned senior has made a very compelling case for a scholarship this week.

Braxton Gardner, Christian Heritage- Gardner is an absolute monster; he has a powerful frame and attacks the basket with reckless abandon. He also showed a smooth stroke from the perimeter, as he knocked down a couple threes tonight. Gardner’s signature moment of the night, however, was a resounding open floor dunk.

Eric Alleyne, Brimmer and May- Alleyne has been especially intriguing this week because of his ability to knock down shots. He has shot well each day, and in the all-star game, he made two tough three pointers off the dribble, one of which he was fouled on. Already strong and crafty with the dribble, Alleyne’s shot-making ability makes him a complete point guard prospect.

Dino Mallios, Winthrop- Though he did not come into the all-star game as highly regarded as a few of the other guards at camp, Mallios represented himself quite well. He has an excellent handle, which he used to explode by his defender and get into the paint on several occasions. Mallios has been tough all week, performing well against some of the best point guards in camp.

David Guillette, Lunenberg High- During the all-star game, the 6’2 Guillette proved that he is amongst the most explosive athletes at camp. First, on a fast break, he slammed home a missed shot. Then, he provided the play of the night later in the game, as he dunked in traffic off of a baseline drive. Guillette had coaches buzzing about his sneaky athleticism and impressive leaping ability.

Justin Turner, Holy Name- Turner demonstrated his knack for beating people off the dribble. In the game, he featured a devastating crossover and a nice touch around the rim.

Andrew Dowton, Milton Academy- The big, strong wing player shot the ball well, as he knocked down his only two 3 point attempts in the game. He has a pure stroke and excellent size and strength to get it off.

Other Players Who Impressed on Tuesday:

-Zach Taylor played very well for the second straight day, as he showed off his excellent quickness and a soft floater in the lane.

-Lutheurson Bonheur had an excellent day, both running the show and creating his own scoring opportunities. In addition to showcasing his terrific quickness and handle, on Tuesday, Bonheur demonstrated that he can make perimeter shots.

-Tylon Smith is another big, strong guard who can really attack the rim. He has had an excellent week and it continued on Tuesday.

-Ryan Canty showed glimpses of his tremendous potential even though he did not get many touches on the block. His most impressive moment of the day occurred when he had a powerful put-back dunk over a helpless defender.

-Brian Salzillo has perhaps the purest stroke at camp. He put it to use in the afternoon session, as he knocked down 5 three-pointers in a game.

-Anderson Santana (Charlestown) had a terrific day, demonstrating a complete offensive skill set. Standing at 6’2 with long arms, Santana got to the rim and finished in traffic, as well as knocking down some deep jumpers.

-Patrick Ackerman may have had his best showing at camp thus far during Tuesday’s afternoon session. He finished plays and showed an impressive skill set for a 6’10 player.

-D.J. Hayes (Windsor Locks) is a very quick point guard who really pressured the ball well defensively and ran his team well on the offensive end. He was adept at getting into the lane and kicking out to open shooters.

-Greg Nicol was excellent again on Tuesday, finishing plays inside, stepping out to knock down mid-range shots, and rebounding the ball effectively.