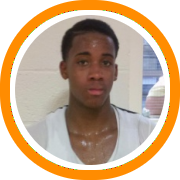 Suffield Academy’s post-graduate point guard, Kendall Jackson, made a verbal commitment to Columbia on Wednesday after receiving his likely letter over the weekend.

Jackson came to Suffield from Bishop O’Dowd High School in California and made his first appearance in New England at this summer’s All-Academic Camp.

“I’d like to thank my AAU coaches over the years, Mike Thomas and Derrick Mosley with Lil’ Bucks, who taught me the value of hard work and are the reason I love the game,” Jackson said.  “I’d also like to thank coach Joe Fuca of Lakeshow Pump N’Run as well as my coaches at Bishop O’Dowd, Doug Vierra and Donte Patterson.”

Jackson also singled out Lou Richie, who he credited for mentoring him both on and off the court during his high school career, as well as Suffield Academy head coach Jeff Depelteau, or “Coach D”, for “giving me another chance and letting me be a part of his program.”

"I'm really happy for Kendall. He has gone through a lot over the last year, and he has had a great attitude thoughout,” Depelteau said.  “Kendall arrived at Suffield with great focus. He worked really hard on and off the court, whether it is shooting 500 shots at the gym or meeting with teachers for extra help. He has completely bought into being a student at Suffield. He has recently began giving tours for admissions and is a great ambassador for the school and our program."

Jackson had seen wide-ranging interest and recruitment since arriving in New England, but ultimately deciding the combination of academics and athletics was too much to pass up at Columbia.

“I chose Columbia because it’s one of the top universities in the world and a great place to play basketball,” Jackson said.  “Coach Smith has the program going in a great direction and I’m excited to begin contributing to the program’s success.”

With his recruitment now behind him, Jackson is anxiously anticipating his future, both at Suffield as well as at Columbia.

“Hopefully I can help lead the program to the NCAA Tournament during my four years!  I’m excited to be a Lion and can’t wait to get things going next year, but until then, I’m excited to now turn my focus to helping our Suffield team win the NEPSAC championship.”

Jackson is currently averaging 11 points, 7 assists, 6 rebounds, and 2 steals per game for a Suffield Academy team which is 5-3 overall and 4-0 in Class B of the NEPSAC.  He will join another local prep product, Choate’s Jeff Coby, in Columbia’s 2013 recruiting class.