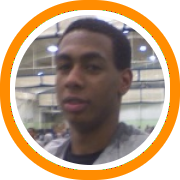 Georges Niang, Tilton (NH):  Tilton had an incredible year by all standards.  And while the “big three” was certainly the foundation of their success, they wouldn’t have been able to beat the best teams in the country without solid contributions from their supporting cast.  Niang was certainly among them as the sophomore anchored the power forward spot for most of the year and showed an ability to score and rebound in the paint against older players while also stretching the defense to the three-point line.

Fred Wilson, Hillhouse (CT):  He reigned in his game between last summer’s AAU season and this winter’s high school season and the consequence of that maturity was that he became a more efficient player while being one of the primary offensive threats on one of Connecticut’s top teams.

Deric McCottrell, St. Sebastian’s (MA):  A high rising athlete that plays above the rim with ease, McCottrell has the length and athleticism to earn the “upside” label.  What impresses us is how he uses those physical gifts to not just finish, but also rebound.

Ricardo Ledo, Bishop Hendricken (RI):  His performance in the first half of the Rhode Island state finals had “star” written all over it.  He’s got all the tools to keep heading in that direction.

Evan Tullar, Spaulding (VT):  He was as impressive as any Vermont sophomore this year, but as is the case for everyone who comes from one of the smaller states, he’ll need to do it again this summer once he starts facing improved competition.

Eric Katenda, Cheshire Academy (CT):  This was Katenda’s first season in New England.  Before the season we wondered if he was too raw to make an immediate impact.  Indeed, he was raw, but he still made an impact…that, along with freakish athleticism and length, equals upside which college coaches love.

Joe Mussachia, Manchester (MA):  Despite playing in a small league in the MIAA, the sophomore forward caught our eye by consistently topping the 20 point plateau.  He backed it up this weekend with a nice performance at the Playaz Ball in New Jersey with his Mass Rivals team.

Bryan Hurley, Boston College HS (MA):  BC HS was better than most expected this year and it doesn’t take a genius to figure out why.  While they featured several good players, Hurley was the engine that made this team go.  His intelligence, floor vision, and playmaking at the point guard spot were impressive all year long.

Stay tuned next week to see how many spots these players jump as our updated rankings will be released.