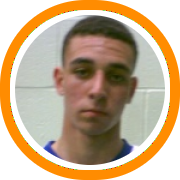 Tilton was solid for all 32 minutes of action as they gradually grew their lead throughout the length of the game.  Jamal Coombs was the best player on the floor as he scored a game high 33 points while picking up 9 rebounds and 4 assists.  Coombs mixed up his offensive attack, and did a great job of getting himself to the free-throw line where he converted all 11 of his attempts.  Alex Oriakhi also put up big numbers going for 23 points and 17 rebounds.  Hotchkiss simply had no answer for Oriakhi inside as he had his way on the glass and when catching the ball with his back to the basket.  We were also impressed with the big man’s physique as he continues to put on more muscle mass.  Scotty Tavares ran the team well and had 8 assists against 0 turnovers, making a variety of great finds off the dribble and also showing range with his three-point shot.

Derrick Wilson was Hotchkiss’ most dominant player as he scored 30 points, grabbed 7 rebounds, and added 4 assists.  The sophomore did the majority of his damage off the dribble as he showed a great ability to get to the 8-10 foot range and then create space for a short pull-up.  Jason Morris settled down after an inconsistent start and got it going offensively as he stopped settling for jumpers and began going to the rim.  He finished with 20.  Also topping the 20 point mark was sharp-shooter Alex Miller who connected on 5 of his 10 attempts from downtown.

The Winchendon School scored a huge victory as they knocked off the nation’s top ranked prep school team, the Patterson School.  After building up a double digit first half lead, they saw Patterson come storming back in the second to take a brief lead.  The game went back and forth for the final five minutes of play with Winchendon taking good care of the ball down the stretch to seal the decision.

Springfield native Preye Preboye delighted the hometown crowd by stepping up and impacting the game in a variety of ways.  He shot the ball well from the mid-range area, mixed it up inside, and finished at the rim for 18 points.  But he was also tremendous rebounding the ball and passing within the flow of Winchendon’s offense.  Hofstra bound guard Yves Jules got his offense going in the second half as he began to connect with his perimeter jumper while showing his ability to play above the rim in the paint.  UMass bound swingman Sampson Carter was also huge as he slashed his way to the rim for a team high 19 points.

Washington D.C. powerhouse Gonzaga College High School and St. Mark’s locked up in a classic defensive battle in the third game of the day.  Both teams were extremely well coached showing outstanding discipline in their defensive schemes.  While St. Mark’s was able to hold Duke bound guard Tyler Thornton in check (he scored just 11 points), Gonzaga won this game in the backcourt as they took good care of the basketball and got point production from junior Cedrick Lindsay who finished with 24.  Conversely St. Mark’s struggled to take care of the ball against Gonzaga’s physical defensive pressure as they turned it over 20 times while handing out 10 assists.

With their backcourt struggling and Nate Lubick limited by foul trouble, Erik Murphy was forced to try to put the team on his shoulders and while he performed admirably (21 points, 13 rebounds, 5 blocks) he was held to 7 of 18 shooting from the floor.

The game was close the entire way through with neither team being able to establish a double digit lead.  Nonetheless, Gonzaga had the advantage for the entire fourth quarter as their lead hovered around five for most of the period.  St. Mark’s was just never able to get over the hump and ultimately fell 60-53.

Worcester Academy always seemed to be in control of this one, although they were never able to completely pull away from St. Andrew's.  Four players scored in double figures for Worcester as Deshawn Dockery had 14, Austin Carroll 11, Ben Crenca 10, and Sam Martin 10.  And although he didn't put up huge numbers, Corvonn Gaines also stood out as he played a very well rounded floor game: playing with good energy on both ends of the floor; going to the offensive glass; running the floor in transition; and making some heady finds off the dribble.  Tony Dolphin also made a nice contribution off the bench as his decision making and passing ability from the high post were crucial against St. Andrew's zone defense.

While St. Andrew's may not have gotten the win, they have come quite a long way since the beginning of the season.  Nyheem Sanders had his second consecutive strong game as he went for a team high 17 points on 6-11 shooting from the floor.  He was again able to keep defenders honest by proving his worth from the three-point line and then was able to produce off the dribble both by utilizing little runners and also by attacking shot blockers and consequently earning trips to the free-throw line.  Russel Deremer (12), Michael Laplante (11), and Mike Carter-Williams (10) also finished in double figures.