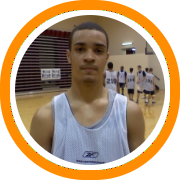 There are very few players in all of New England who have put up the same type of numbers or won as many games as Tylon Smith Jr. has within the last two years.

During his junior season at Kingswood-Oxford he averaged 26 points per game and led K-O to a 23-2 record and a run to the semi-finals of the NEPSAC Class B tournament before eventually falling to a loaded St. Mark’s squad 53-47.

On the AAU circuit Smith has played for his father, Tylon Smith Sr., since he was in grade school and made his final season with the Connecticut Knights a memorable one last spring and summer, averaging over 27 points per game, winning two different tournament championships, and advancing to the finals of the Basketbull Elite 8, the semi-finals of the Hall of Fame National Invitational, the quarterfinals of the West Virginia Jam Fest, and the quarterfinals of the Adidas Super 64 in Las Vegas.

Smith’s best work, however, has come during the current season as he has led Kingswood-Oxford to a 10-2 start while leading the team in points, rebounds, and assists.  Currently averaging 32 points and 12 rebounds per game while playing the point guard position, Smith has earned a double-double in all twelve of K-O’s games this year.

For his career Smith has now scored over 1400 career points, which is good for third place on the all-time Kingswood-Oxford scoring list and only a couple hundred beyond Durrelle Brown, his former assistant coach and the second leading scorer in school history.

Smith’s success earned him a wide range of interest and offers on the recruiting front until recently when he made a verbal commitment to Southern Connecticut State University and head coach Mike Donnelly.

In fact, Donnelly had been recruiting Smith for close to two years, dating back to his time as the head coach at Post University and then hosted Smith for an official visit at Southern on the first weekend allowed this September.

“When I went up to visit I felt comfortable with the players and the coaching staff,” Smith said.  “I like what they’re doing over there with the change.  The coaching style fits with how I’ve played my entire life which is run and gun.”

Two weeks ago, despite growing interest from division I programs, Smith felt comfortable enough to make his decision.
“I just felt right on the campus,” he said.

With his commitment now out of the way, Smith is free to concentrate on his final remaining goal and that’s one last shot at the NEPSAC Class B championship.