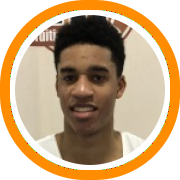 Columbia landed a verbal commitment from Cameron Shockley-Okeke on Monday night following his official visit to their New York City campus over the weekend.

Shockley-Okeke is a Connecticut native who graduated from Milton Academy last year and is currently in his post-graduate season at Phillips Exeter Academy. He starred with Team New England on the 2018 Adidas Gauntlet.

His commitment came less than 48 hours after fellow Exeter post-graduate Jordan Jones made a verbal commitment to another Ivy League school in Cornell.

A late blooming southpaw forward, Shockley-Okeke is a long lefty capable of making tough shots, scoring in bunches, and potentially playing both forward positions. He was a young senior last year and has taken advantage of his extra year to continue developing his game and body.

He had some huge games for Team New England last spring, especially in Atlanta when he exploded for 34 points in a single game, and was also a big part of their championship at the Las Vegas Fab 48.

Prior to that, he helped Milton Academy advance to the finals of the NEPSAC Class A tournament last year and earning first-team All New England honors in the process.

Below is a copy of his senior mixtape.