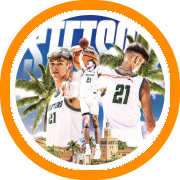 After that year, Sheridan made the decision to transfer to Long Island Lutheran. His first season like many others was cut short due to the COVID-19 Pandemic. This past season, he was a part of a team that made it to the New York State Championships Class AA title game.

His next move will be in NEPSAC AAA as he chose to take a post-grad year at Newman.

Sheridan competed on the Adidas 3SSB circuit with New York Jayhawks. He had per game averages this past spring/summer of 9.5 points and 4.3 rebounds while also hitting 18 three-pointers.

“Finley is just scratching the surface on who he can become as a person and player,” said Newman head coach Jackson Johnson. "He is smart, willing, and skilled with 6’9 size. His versatility on both ends of the floor makes him a really exciting prospect and someone we will use in a variety of ways this year.”

“He also has put on 10 pounds since coming to campus and is really picking up momentum in the weight room. I am excited for his future in college basketball. Stetson got a good one.”

Sheridan is the first member of Newman's 2023 class who has finalized their plans to play division one college basketball next fall.