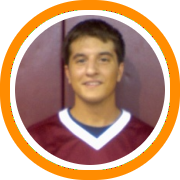 The commitment comes as a surprise to many since Sharkey hasn’t even begun his junior season at NMH yet.  But Sharkey is a young man who has been playing on the exposure seen for quite some time now, in fact, you could even say he has grown up in front of our very eyes.

Before even reaching his freshman year of high school, Sharkey had already earned national recognition at the Adidas Junior Phenom Camps and put up big numbers playing with the high school team at the Brimmer & May School.

By the time he reached his freshmen year he was arguably as well known in the region as any other underclassmen.  Such recognition carries great pressure for a youngster, but over the years Sharkey has not only consistently improved his game, but always handled himself in a classy and mature manner.

So really an early commitment isn’t too much of a shock when considering what Sharkey has already seen, experienced, and learned.

Northfield Mount Hermon head coach John Carroll expects Sharkey to be an impact performer for the Bears and says his game is a little reminiscent of Ricky Rubio’s.

“Joe is a terrific player who has a unique style and incredible feel for the game,” said Northfield Mount Hermon coach John Carroll.  “He is a clever passer, his shot is much improved, and so is his tempo.  He has learned to be a good communicator, is now comfortable leading a team, and Brown will benefit from all of this.”

Northfield Mount Hermon has developed a reputation for being a breeding ground for Ivy League players over the years, but it was after seeing Sharkey at this summer’s Hoop Mountain Academic All-American Camp that the Bears decided to offer the rising junior a spot on their squad.

“Joe made a very strong connection with Jesse Agel and his staff, especially T.J. Sorrentine,” Carroll said.  “It felt like home to him and it certainly helped that Brown was so close to home.  He had Princeton as another school in hot pursuit, but Joe decided to keep it close to home. Brown got a good one in Joe!”