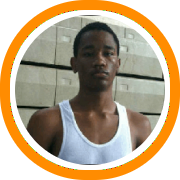 The Scott Hazelton Basketball Camp kicked off today in Andover, Massachusetts at Greater Lawrence Tech and there was an electric atmosphere in an old-school gymnasium loaded with talent.

There were additional previously-seen players who made strong impressions and others who landed on our radar for the first time.  Let's take a look at the guys who used this day to make waves.

Luis Monteiro '15 - After hearing the whispers all summer, we finally got a chance to get a nice long-look at Monteiro today and came away thinking that there could be truth to some of the 'folk-tales' which have circulated the rumor mill.  Here's the deal.  Having recently turned 16, Luis is a young man from Santo Domingo in the Dominican Republic who arrived in the United States only several weeks ago.  He is about 6'7", with long arms, and dazzling ability with the basketball in his hands.  Also dazzling is his explosive athleticism, smooth body-movement, and fluid feel out on the floor.  As he fine-tunes his game at Wilbraham & Monson, where he'll be an incoming sophomore, there is no ceiling on this kid's potential as a ball-player.

John Powell '13 - Had a big 2011 Summer alongside Kaleb Tarczewski, making plays in the paint and attacking the rim from the baseline as the defense keyed on Zeus.  Powell was similarly impressive today playing alongside DeRosiers down in the trenches.  Thrives alongside a high-level anchor.

Jacquil Taylor '14 - When he plays alongside a big-man that demands attention, Jacquil brings an invaluable element to a ball-club, consistently making plays and providing a consistent above-the-rim presence on both ends of the floor.  As a complimentary front-line player, this kid has the ability to play at a high-level and there are a lot of programs out there who will thoroughly investigate this angle.

Goodluck Okonoboh '13 - Got in a very productive run matching up against DeRosiers, providing his usual shot-blocking, rim-attacking presence while also rebounding the ball above the rim and starting the break with quick outlet passes.

Djery Baptiste '15 - After a great month of July in which he made believers out of the masses, Baptiste began August with another eye-brow raising performance, playing neck and neck with the rest of the previously touted big-man stable while standing out by running rim to rim to finish or challenge at the basket while also banging around with his now-chiseled frame.  Bona-fide high-major prospect.

Josh Sharma '15 - Focused on exposing himself to as many high-level play-making opportunities as possible, Sharma continues to improve at a steady clip as he develops physically and learns to play the game as a seven-footer.

Chris Baldwin '15 - Again put on display his immense talent as he took over the gym during one stretch of the morning session with a series of explosive dunks, several in traffic.  If he gets into the right mind-set, he could be scary at Springfield Central H.S. this upcoming season.

Andrew Simpson '14 - While playing on a talented quintet, Simpson showed impressively in a complimentary role as a high-energy athlete at the combo-forward position.  Competes with physicality in the lane and has the ability to make plays above the rim.

Maurice Taylor '13 - Said this before and will say it again...when Mo plays a simple game and lets his length and athleticism do the work, he is guy who consistently makes positive-plays for his team in a top-tier game.

Sammy Mojica '14 - Another guy who was impressive in a complimentary role, Mojica thrived as shot-making floor-spacer who facilitates and plays crisp team-ball on both ends.  Rebounds and defends with physicality.

Tyonne Malone '16 - The left-hander is very effective in getting into the paint by slashing with the dribble in small spaces from the perimeter both in the half-court and in-transition.  Always a threat to take the elevator and make an explosive play above the rim.

Jalen Adams '15 - Continued to pour the sauce on as he religiously infiltrated the paint off the dribble to get to the basket and score the ball.  The explosive back-court play-maker also did a nice job of getting the ball into the post before making explosive basket-cuts to create space for a teammate on the block.

Adrian Oliveira '13 - Had an impreesive day cutting up the defense efficiently with the dribble from the back-court to create offense for his squad.  Playing on a talented quintet in-which he was the only true guard, Oliveira thrived running the show from the point, playing a facilitating role while pouncing on scoring opportunities by reading the space on the floor before using his speed to get to the rack.

Kaleb Joseph '14 - With a new focus on attacking with the dribble in straight, vertical lines, Joseph made high-level plays throughout the day by getting to the basket and either creating or scoring it himself.

Pat Benzan - Has tightened up his floor game and regained a lot of his quickness following a hamstring injury in the spring.  Did a nice job today of running his squad crisply while scoring the ball with floaters in the lane and hitting athletes up top for alley-oop dunk shots on the break.

Saul Phiri '16 - An incoming freshman at Haverhill H.S., Phiri is a long 6'3" guard with the potential to develop into a very good player.  Combines length, athleticism, and skill with the ability to rebound and block shots from the back-court.  Also has the tools to guard three positions and with his length combined with his foot-speed, Phiri shows as a guy with the potential to develop into a shut-down type defender.

Jack Preston '15 -  Made a strong first impression as an undersized, but long-armed big with a versatile game and the game to attack the rim with both hands.  Has the tools to potentially develop into more of a hybrid forward.

David Murrell '14  - Athletic, hard-working wing who plays a solid floor game and does a nice job of slashing to the basket to score the floor.

Nelson Zayaz '14 - Shifty point guard with a crisp pull-up game and a dangerous long-range-stroke.  Sees the floor and understands the game.

Anthony Dionne '14 - Hard-working left-handed guard who slashes with the dribble to get to the basket and finish in transition.

Mike Lemke '15 - Tenacious big-man who rebounds the ball relentlessly and can score the ball around the basket.

Kabongo Ngalakulondi '15 - A guy with a great body and a lot of natural who shows flashes.

Mike Attah '13 - Physically strong, hard-nosed small forward who would run through a wall to make a play for his team.  Competes all over the floor.