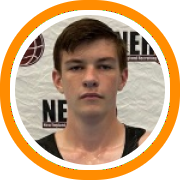 The NERR-TV Virtual Showcase is ideal for any rising senior who is not just looking to make a name for himself, but has the game and talents to back it up.

Boston Latin's Jake Harrison fits that description to a tee and so he's an ideal place to start.

Harrison found his way onto the NERR radar by playing with ASA Hoops and attending the Mass Open Gym last fall. While that first impression was enough to convince us he had the tools to play at the next level, the opportunity to dive into the stats and film below paints a picture of a prospect who is already putting up huge numbers in the MIAA and yet still possesses the tools to keep evolving for the next level.

Presumably, college coaches should be as enlightened as we were, as it's very clear that this rising senior should be getting recruiting from a wide-range of college programs.

I would like coaches to know that I truly love the game of basketball and I'm a super competitive person. I want to get better every day in every aspect of my life, including basketball.  As a young, 16 year old junior I have a high basketball IQ and see the court really well. At almost 6'5, I have good length and versatility allowing me to play the 1-5 positions. I averaged 19.6 points, 10.5 rebounds, and 3 assists a game in a competitive D1 conference in Massachusetts. I always seek to defend the best player on the opposing team and never back down from any challenge I face. My favorite part of basketball is offensive rebounds because I feel like it's a huge boost to your team if you can grab an offensive rebound and get a second chance to score. I know that I hate losing way more than I love winning and because of that I'll always push myself and my teammates to be the best we can be.

"Jake is a versatile two-way player who can impact the game in a variety of ways. Jake is in the mold of a point forward who can score, pass, create and rebound the ball. He's a high IQ player, great teammate and is a leader on and off the floor."
- Brendan Smith, Boston Latin Head Coach & ASA Hoops Director

Harrison is a true mismatch problem who can score the ball in various ways and at various levels. He's ultra efficient around the basket with a post-game, jump-hook, and the nose for the ball to get second chance points. From the perimeter, he has a wealth of shooting potential with a high and fluid release, both off the catch or the dribble, that suggests his jumper should only continue to develop into a more formidable weapon in the future. Physically, he's a solid athlete but has also continued to grow late into his high school years. He also has a clear basketball IQ and understanding of how to play in structure that comes across both in person and on film. While he plays an inside-out game currently, he projects as a versatile wing at the next level.