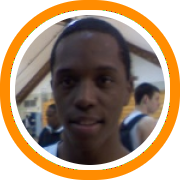 For the sixth consecutive year Bishop Hendricken is the division I state champion in Rhode Island.  And the prospectus doesn’t look too bad for the next two years either as a new star was born on Saturday in Ricardo Ledo.  The sophomore dominated the game out of the gate as he scored an incredible 25 first half points, putting points on the board in virtually every way imaginable.  But it was actually Mount Pleasant who scored the first punch, starting the game with a 7-0 run and eventually going up by a 14-9 margin.  But that’s when Ledo stepped up.  He was able to get himself going by getting out and making plays in the open floor.  Once the jumper started to fall as well, there was little Mount could do to stop him.  Behind Ledo, Hendricken rattled off a 20-2 run to go into halftime with a 43-33 lead.  It was more of the same in the second as Mount Pleasant would cut it to as little as four at one point, only to see Hendricken go on another run that would push their lead to 78-62.  Mount Pleasant would be unable to recover as they would eventually fall 94-76.  Hawks’ senior guard Billy Baron finished with 25 points on the night and was named the tournament’s Most Valuable Player.  Fellow senior Matt Barboza scored 19.  Mount Pleasant was led by Billy Soriano with 25, Frank Robinson with 18, and Jeff Darius with 12.  Barboza, Soriano, and Darius were named to the all-tournament team along with Cranston East’s Mike Juarez and Cranston West’s Ethan Smith.

With many of the key contributors from last season’s championship team returning to start the season, Classical was anointed the early favorite in D2 from day one.  On Saturday, Classical lived up to that billing as they claimed their second consecutive state title defeating Narragansett in convincing style 69-49.  Michael Palumbo claimed tournament MVP honors by scoring 22 points, including 18 in the second half.  Classical’s dominant big man Ashton Watkins was the focus of Narragansett’s defense from the onset but still managed to get to the rim for 13 points and 17 rebounds.  He also surpassed the 1000 point barrier in both of those statistical categories for his career.  But as has been the case all year long, Classical’s true strength was in their depth and versatile attack as Palumbo and Watkins were joined in double figured by Jordan Jones with 15 and Levon Waite 11.  Jay Jeannotte led Narragansett with 17 while Nate Patterson added 12 points and 6 rebounds to earn player of the game recognition from his team.  Brendan Kenny also added 12.  Watkins, Jeannotte, and Kenny were named to the all-tournament team along with Scituate’s Jared Hanson and Coventry’s Trevor DiMicco.

Moses Brown scored their second consecutive state title by defeating Central Falls 60-49.  The win is considered an upset by most as Central Falls came into the contest with a 19 game winning streak, two of which came against Moses Brown.  But some cold shooting from Central Falls and a big performance from Moses Brown guard Anjuwon Spence (19 points) was enough to get it done.  Spence earned the tournament’s Most Valuable Player award.  George Carle and Luis Pena had 16 & 10 for Central Falls, which was good enough for spots on the all-tournament team were they were joined by Moses Brown’s Luke Martin, North Smithfield’s Stephen Vario, and Mount St. Charles’ Ryan Pangborn.