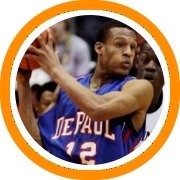 The fourth installment in a five part series takes a look back at New England’s class of 2010.  While we were always aware of the class’ unique talent, both in star power and overall depth, this retroactive look back at the group really illustrates why it was arguably the region’s best in the last five years.

The sheer amount of talent caused some players to be ranked far lower than they would have in other years while also making the diamonds in the rough that much harder to pick out.  Here’s a look at those who were most underestimated:

What we missed – As Telep notes, the consensus was that Smith was a scoring lead guard who didn’t really make those around him better.  What no one anticipated was that Rick Pitino would actually utilize Smith off the ball, allowing him to do what he does best – score the basketball, by hiding the Cardinals’ lack of size in their 2-3 zone.

Cleveland Melvin, Notre Dame Prep, 20th in New England – When Melvin de-committed from UConn early in his post-graduate season at Notre Dame Prep, most assumed it was because the Huskies didn’t think he was quite good enough.  What we know for sure is that Melvin went on to win Big East rookie of the year honors last year as a freshman and is currently averaging 19 points and 7 rebounds per game.

What we missed – Melvin’s supreme athleticism was well documented during his time at Notre Dame Prep, but so were his suspect ball skills.  While his limitations might be further exploited in other systems, his talents are tailor made for DePaul, where running and jumping is the name of the game, and there was an immediate opportunity for playing time.

Devon Sadler, Winchendon, 42nd in New England – Sadler was considered to be a solid mid-major prospect with a college ready body and high level athleticism.  But he proved to be more in his first season at Delaware, averaging over 13 points per game en route to CAA rookie of the year honors.  He’s blowing that production away as a sophomore, averaging over 20 points per game.

What we missed – On a deep and talented Winchendon team, Sadler was perceived as more of a dominant physical presence who could provide instant offense.  Given the opportunity at Delaware, Sadler has shown he’s actually more of a pure scorer and even someone capable of creating offense for his teammates – which isn’t something we realized during his stint in New England.

Latif Rivers, Avon Old Farms, 58th in New England – He was highly regarded at Avon Old Farms, honoring first team honors in the then Western New England section of class B, but few people could have predicted he would average 14 points per game for Wagner as a freshman and be the leading scorer for a team that would start his sophomore season at 10-3 including a win over nationally ranked Pittsburgh.

What we missed – In retrospect, Rivers had a tendency to play to the level of his competition a little bit and we held that against him, without giving him the necessary credit for being as versatile of a guard as he is, capable of scoring in a variety of ways or playing on or off the ball.

Ike Azotam, O’Bryant HS, 59th in New England – Dominique Langston was supposed to be the star of Quinnipiac’s 2010 class.  Azotam, coming out of O’Bryant High School and Marianapolis Prep was perceived to be a solid role playing type.  That’s essentially what he was last year as a freshman, but his sophomore season has been anything but as he’s averaging over 15 points, 10 rebounds, 1 block, and 1 steal per game while establishing himself as one of the nation’s leading rebounders.

What we missed – A couple of things really.  First, our projections for Azotam’s physique were off.  We knew he was strong and athletic, but had no idea he would be capable of adding as much muscle as he has while still maintaining his quickness and athleticism.  Secondly, we didn’t realize he was as special of a rebounder as he has turned out to be.