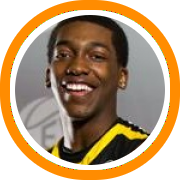 There isn’t a class AA program with a stronger recent tradition than the Tilton School Rams.

With four consecutive NEPSAC championships that spanned from 2008 to 2011, and another trip to the finals in 2012, head coach Marcus O’Neil’s club was simply the standard by which others were judged.

Current senior Terance Mann is the latest high caliber talent to come from the Rams program. He’s already pledged to the ACC, after committing to Florida State in August, and is as versatile of a player as there is in New England. After running the point guard position for the first time this summer, the six-foot-five senior is literally capable of playing four different positions in a high school game. He’s proven his ability to score against a high caliber of competition, but really sets himself apart with his passing, rebounding, and winning intangibles.

The only thing that separates Mann from his predecessors at this point is a championship, and this season may be his best chance yet. Tilton has a good combination of size and position depth to help them contend in what appears to be a wide-open race for the Class AA crown.

The only other committed player on the roster is former North Quincy High School big man Anthony Green, who just last week solidified his plans to return to Boston and suit up for Northeastern next season. The six-foot-nine big man is loaded with upside and still just discovering all of his natural talent as he continues to get into shape and harness a skill set that extends out to the arc and also includes some deceptive bounce around the rim.

Junior forward Robert Martin Jr., now in his first season at Tilton after transferring from Nobles, will likely line up next to Green, giving the Rams a rugged and versatile presence at the four-spot.

The second unit up front will include a pair of post-grads who both have a chance to prove themselves as scholarship caliber players this season. Connor O’Neil is a highly efficient big man, originally from Georgia, while Andrew Cartwright is a skilled step-out big who comes to Tilton by way of Nokomis High School in Maine.

Franklin Porter, now in his second season with the Rams, is likely the next member of the starting line-up. He had a terrific showing the day NERR visited Tilton’s open gym this fall and looks to be a among the most improved players in Class AA and very likely on the verge of a big senior season.

While Coach O’Neil will have the luxury of going big at times with a potential backcourt of Porter and Mann, there are several other options in the backcourt.  The most notable of those is New Hampshire native and repeat junior Brett Hanson, who also looked particularly good the day we were in the gym.  Fellow junior, Sarju Patel, could also contend for playing time with his shot-making ability from downtown while Elijah LaRoche, Cem Koyuncu, Joe Roberts, and Tom D’Angelo provide four more prospects and add even more backcourt depth.

Together, this is a group that won’t be the best in the league on paper, but has a chance to come together and become more than the sum of their individual parts. If they can do that, they’ll contend in Class AA, and potentially even add their names to the long list of champions in the Rams’ record books.