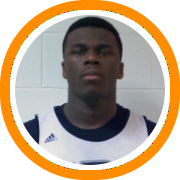 Sean Obi signed a National Letter of Intent with Rice University on Wednesday, just hours before the early siging period came to an end.

Obi's commitment comes only days after his official visit to Rice.

Obi is a Nigerian native who came to the United States in August of 2010.  His story is a truly unique one, perhaps best described in this article from Greenwich Magazine, which tells his of his journey from his home country and the impact he made on all those around him upon arriving in Connecticut.

From a basketball perspective, Obi transformed Green Farms Academy's program from the day he arrived, leading a team that had only won a single game the year earlier to a 13-10 rerecord in his first season.

His dominance only continued last year as a junior as he physically dominated the competition on a daily basis.

He's had similar success playing with Connecticut Basketball Club on the AAU circuit.  Two years ago he played with the likes of Andre Drummond and Kris Dunn while this season he was a pillar of the CBC team that made a run to the Sweet Sixteen of AAU Nationals.

Here's a look back at Obi talking to Cox Sports and the New England Recruiting Report at last June's Elite 75 Showcase.