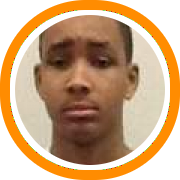 - Electric floor-general Ikenna Ngduba stole the show and led a talented and deep Expressions Elite 8th grade Squad to the Championship in the 14u division.  Despite being without the services of three vital cogs in forwards Greg Fernando and Kimani Lawrence and talented upcoming combo guard Johnny Blaize, X-Elite showed this weekend their sea-floor depth in emerging as champs from a strong 8th Grade Field.  In addition to Ikenna, Sean Floyd's ball-club was led on the weekend by the likes of Keyshaad Dixon, Matt Craig, Quan Roberson, Jaris Ashley, Malik Bongu, Nana Boakye-Mensah and others.

Players
Keyshaad Dixon - Sleek and lengthy wing player who does a little bit of everything on both ends of the floor. Possesses a big motor that never stops working. Shows a high IQ and great patience on offense and allows the game to come to him.

Quan Roberson (Picture Above)– With Fernando and Lawrence absent for the weekend, Roberson stepped and did a terrific job on his squad’s championship run by providing a boat-house anchor on both ends of the floor along with his front-court running-mate Kaheem Campbell.

Matt Craig – (Pictured on Homepage) Was very impressive as a high-IQ glue-guy who makes his teammates better and fills it up from both the mid-range and long-range.

Jaris Ashley – Long, lanky, smooth south-paw back-court operator who plays with supreme confidence and has a real knack for scoring the ball and making plays.

Malik Bongu – Strong, athletic, explosive guard with good size who was a terror defensively and in transition all weekend.

Brandon Hurst (CT Elite) - Big-time athletic ability in the back-court; Hurst is fun to watch with his jet-engine speed and hypnotic change-of-direction ability. Going to be fun to watch this kid progress.  Devin Hester Flavor

Shawn Coles (CT Elite) - With his combination of size, length, ability, attitude, motor, and compete-level, Shawn Coles was perhaps the most intriguing center prospect at last month’s Junior Elite 75.  He validated that assessment this weekend by showing that, since last month, he has already made significant progress on the path towards reaching his potential as a longster-game-changer.

Saul Phiri (VBC) – Has the ability to charismatically put his team on his back.  Scored the ball from all over the floor in the game we saw his VBC team play against a loaded Riverside Church line-up.

Steve Enoch (TMT) – Probably stands about 6’4 right now, with a thick, powerful frame and a sprawling wing span.  Absolutely dominated the paint in the game we saw, swallowing rebounds whole and challenging shots by the dozen.  Scores with a soft touch around the bucket.  Red-Alert Radar on Big Steve.

Tye Jerome (Riverside Church) - Complete guard who can play either the 1 or 2. Plays a great floor game and keeps team mates involved while showing good patience to connect on open looks. In the semi final Tye connected for 32 points and proved he has big shot capability by knocking down 2 free throws to send the game into OT & also hitting a 35 foot pull up 3 that kept Riverside in the game under 10 seconds in the extra frame.