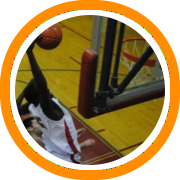 Mabor Gabriel, Trinity HS – Two years ago Gabriel was a lanky 6’5” freshman who moved awkwardly on the court and was very raw skill-wise. Now he’s the best college prospect college prospect in the NHIAA. The 6’7” junior forward has tirelessly worked on his game and developed into a versatile player who can play inside and out. Gabriel can run the floor, block shots, hit threes off the catch with a smooth, quick release, put the ball on the floor and attack the rim and goes hard after rebounds. The scary part is he still has a lot of upside, as he is still just scratching the surface of his potential.

Matt Barr, Exeter HS – What more could you want from a two-guard? Barr is a very quick, athletic 6’1” player who can stroke it from long range off the catch or the dribble. He can also break his man down off the dribble with some devastating dribble drive moves, including a crossover, hesitation dribble and spin move into the lane. Barr plays the game at a fast pace, can score the basketball but also makes the extra pass and doesn’t force shots.

Dominic Paradis, Spaulding HS – Paradis has been starting on the varsity since he was a freshman, and over the summer he had a dominating performance by scoring 25 points on a good Pelham High team. At 6’4” he’s a good face-up four man who can shoot the ball from 18-20 feet and also put the ball on the floor and take his man off the dribble. He’s a finesse forward, but for a wiry kid he’s actually a pretty good post defender. Paradis has a soft touch around the rim and in the mid-range area.

David Hampton, Lebanon HS – Hampton is a lights out shooter, and can really score in bunches. He’s a 5’10” combo guard who has the quickness and handle to play the point, but the shooting ability to play the two. Defensively he’s tough and doesn’t back down from anybody. Hampton excels in a fast paced game, where he can lead or finish on the break.

Rene Maher, Pembroke Academy – There’s no question there is less and less true point guards out there. Evidence of that is the fact that Maher is one of the only true point guards on this list. Make no mistake though, this kid can flat out play. He is tough as nails, lightning quick, has a tight handle and knows how to run an offense. Maher is explosive off the bounce, and despite only being 5’8” he is strong enough to finish inside against bigger players.

Mike LeBlanc, Dover HS – LeBlanc has a high upside due to his size and ability to shoot the basketball and run the floor. LeBlanc is 6’5” and has a smooth stroke from the outside. He can also get out on the break, beating other players his size down the floor to finish on the other end. In the half court not only can he shoot but he can also catch the ball in traffic and finish through contact.

Matt Persons, Pembroke Academy – Persons is a natural scorer from the wing position. He’s a very good spot-up shooter and if you play up on him to take away his jumper he’ll go by you off the dribble. He’s in great shape, is a hard worker and excels when getting out on the break and finishing either on a defender or before the defense gets back.

Travis Descoteaux, Manchester West HS – Descoteaux transfers to Manchester West after playing on the varsity for Trinity High for the past two years. He might be changing schools, but Descoteaux is still one of the top players in the class, no question. He’s played in a lot of high level games over the years and isn’t fazed by big game situations. The 5’11” two guard has a strong handle to go with an above average pull-up jumper and can also take it all the way to the rim and finish.

Majak Wenyin, Manchester Memorial HS – An intriguing prospect because he has such a high upside. Wenyin is 6”5 and can play either guard position. He’ll make some nifty dribble-drive moves to get by his man, can hit the outside shot with regularity and since he’s a 6’5” combo-guard he’s able to get his shot off over anyone guarding him. Wenyin is still a baby physically and his skills are still fairly raw, so there’s no doubt his best basketball is ahead of him.

Brandon Len, Souhegan HS – Len is the other true point guard on this list. He might only be 5’7, but he plays with a lot of heart, competes on both ends of the floor and is the best passer is the NHIAA’s best passer, regardless of class. So many of today’s players just want to score the basketball, so it’s refreshing to see kids like Len who are not only pass-first point guards, but who also make their teammates better with their court vision and ability to lead the break and drive-and-dish in the half court. Len has also developed good range on his jumper to keep defenses honest.

Troy Pelletier, Manchester Central HS – Pelletier is a 6’2” wing player whose strength is slashing to the basket. He can take it all the way to the rim and finish through contact, but he also has a very good mid-range game so he will pull-up anywhere around the elbows, foul line or even the baseline. Pelletier is a versatile player who can play inside or out.

Zach Grattan, John Stark Regional HS – Grattan is a 6’7” big man who has slimmed down over the last few months and is now in great shape. He can now get up and down the floor quicker and stay in games longer, which will only help as his skills continue to develop. Grattan is active on the boards and his foot work and post moves continue to improve.

Jack Preston, Nashua High South – Preston is a kid who is just now starting to come into his own as a player, so you can look for him to keep getting better as he now starts to play in more high level games/events. The 6’5” power forward has a strong yet athletic frame, attacks the rim off the dribble and crashes the boards.

Devin Springfield, Conant HS – Springfield might come from a small school in the middle of nowhere, but don’t let that fool you. After all, his older sister Brooke is now a freshman guard for the SNHU women’s team. Last year as a sophomore Devin was a smooth shooting two guard who could also break you down off the dribble. He can still do those things, but now he’s two inches taller at 6’3” and also got stronger so he’s now able to defend against and finish inside against bigger players as well.

Kaleb Marquis, Concord HS – Marquis is the NHIAA version of Juan Dixon. He’s an undersized two guard but has a motor that’s always running and is a lethal shot maker in the mid-range area. He only needs a little bit of daylight in order to get a shot off, and he’ll run off screens or use a hesitation dribble or shot fake to create looks for himself. His pull-up is deadly anywhere from 15-18 feet away, or he’ll get into the lane where he can make the teardrop shot with regularity.

Tyler Livingston, Alvirne HS – Versatile 6’4” forward who can battle inside but also stroke the three ball. Livingston has a strong handle and outside shot for a kid his size, and he’s another kid who is just now starting to play in some high level games so if he keeps working he has a high upside as well.