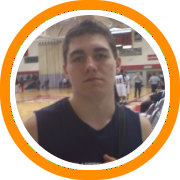 The NH public High Schools sometimes get a bad rap when it comes to basketball. The perception is that the game speed is slower and the players are less athletic than in other states. But don’t sleep on the Granite State. This spring and summer we learned that NH kids can play with anyone based on the play of the Granite Sate Jayhawks and Mass Rivals, whose teams had a number of NH players. There have also been a number of NH kids go on to play college ball in recent years, including Corey Hassan, Tyler Roche and Chris Lutz. While players like Jordan Laguerre, Scott King, Kaleb Tarczewski and Jared Fahmy are all leaving to go prep, and Mike Thorpe moved to Connecticut, there is still plenty of talent in the NH public schools.

I will be breaking down the top prospects in the NHIAA. Most of these players are very underrated.  We’ll start out with the Class of 2010, a class which Laguerre and King belonged to only months ago.

Jake Nelson, Nashua High South – The most well known player in this class is also the best. He’s a prototypical point guard. He’s 5’11”, and has a good combination of quickness and strength. Skills-wise, there’s not much he can’t do. He’s fundamentally sound, an exceptional passer, good shooter and ball handler. He has a good feel for the game, makes his teammates better and is one of the state’s best defenders. He gained valuable experience in the off-season playing for the Granite State Jayhawks. Had some big games for them, against top competition. There were some rumors over the summer that he might transfer elsewhere, but he’s staying put. Wherever Nelson and his Purple Panther teammates play this year, you can bet college coaches and scouts will follow.

Alex Burt, Dover HS – Like Nelson, Burt is also a 5’11” guard, but is a different kind of player. Burt is more of a scorer than a distributor. He’s better playing off the ball at the two guard spot, but also has the ability to play the point. He’s very good at moving without the ball, running off screens and getting open, freeing up space for his jump shot. If the defense focuses too much on him than he does a good job of finding his teammates for easy buckets. He’s a very good ball handler, might be the best shooter in the state, and can score from anywhere on the floor.

Kevin Cressy, Merrimack Valley HS – This 6’6” forward/center has that combination of size and skill that is so popular with scouts today. He has the ability to score inside, guard other bigs down low and rebound. At the same time, he can step out, his the 18 foot jumper, drive the hoop, and handle the ball very well for a kid his size. Only question with him is consistency.

Sheldon Benson, Pembroke Academy – Talk about versatility. This 6’1” player has the ability to play four different positions, and actually plays center at times for Pembroke. He has the strength and leaping ability to match up with bigs down low and the ball handling and court vision to play the point. His natural position is on the wing, where he’s at his best slashing to the rim, but can also know down the three if you give him the room. One of the most athletic players in this class as well.

Zack Mathieu, Pinkerton Academy – The 6’7” center will be a third year starter this season for the Astros. He’s exceptional on the defensive side of the floor, rebounding, blocking shots and defending the state’s top bigs. His offensive game is still raw, but he’ll be asked to do more of the scoring this year, with Pinkerton graduating its top two scorers from last season. Interestingly, his future after this year will be less dependant on his post moves, and more dependant on the MLB draft. He’s an All-State catcher and has had Arizona Diamondback scouts looking at him.

Scott St. Lawrence, Bishop Guertin HS – He’s a versatile 6’4” forward. He has good skills and confidence. He can shoot the three and put the ball on the floor, while also having the size to score down low. He also has a strong mid-range game. He was another kid who played for the Jayhawks this spring and summer.

Cormac Fitzpatrick, Manchester Memorial HS – A 6’0” two guard, he’s probably the best shooter in NH, and possibly all of New England. He definitely has the best range in NH. Anyone who’s seen this kid play has seen him drain three’s from far beyond the arc. He’s more than a shooter, though. If you play up on him too much, he’ll go by you and hit the 15 footer. He’s strong, tough, and a very smart player. He’s a good defender, and never turns the ball over. He won a state title last year alongside Laguerre at Trinity. This year, he’ll try to win back-to-back titles…playing for two different schools! He transferred to Memorial this summer so he could play his senior year for his father, Mike Fitzpatrick.

Alex LaRosa, Salem HS – This 5’9” combo guard is another one of NH’s lethal outside shooters. He does need to get bigger, but he’s lightning quick and plays his butt off. He’s a great shooter and knows how to run the point. He was arguably the state’s most improved player last year, after barely playing as a sophomore. He also played for the talented Jayhawks AAU squad.

Ben Proulx, Pinkerton Academy – Another Jayhawk player, this 6’4” forward is also a third year starter. He will certainly be playing football in college, so the question is whether he will go somewhere that will enable him to play football AND basketball. Ben is a tough, strong post player. Good defender, good slasher, plays hard.

Phil Hayden, Trinity HS – Hayden was also a member of last year’s championship Trinity team, but unlike Fitzpatrick, he’s staying with the Pioneers for his senior season. Hayden, like Nelson, is a prototype point guard. He’s and inch taller at 6’0”, but not as strong as Nelson. Still, he’s very quick, decent shooter, and an above average defender. He does all the little things well, really hustles. What separates him is his passing. He’s a pass first shoot later PG, has great court vision, and has the knack for finding the open man and fitting the pass right in there.

Matt Couture, Manchester Memorial HS – A very 6’1” guard, Couture is a very well rounded player. In fact, that might actually be his downfall. There really isn’t any weakness in his game. He does everything you could ask a 6’1” combo guard to do well, there’s just nothing that he does very well. He shoots a line drive jump shot, but it still goes in most of the time. He can play the 1 or the 2. Not a great slasher, good mid-range game. Good competitor and hustler.

Tommy McDonnell, Oyster River HS – The son of UNH head football coach Sean McDonnell, and I’m guessing he’s tired of being introduced that way. Tommy is a tough matchup for opposing teams. He’s a point guard is 6’1”, but very close to 6’2”. Most teams don’t have a point that size. And for a player his size, he’s very quick, can shot the three and drive the hoop.

Eric Watson, Merrimack HS – A similar player to George Tsougranis, now at Tilton. Both are effective inside players, despite being shorter than 6’4”. Watson is a 6’3” forward, who can score inside, rebound and defend well. He’s very strong, a good slasher, and can hit the mid-range jumper. Oh yeah, and he was also on the Granite State Jayhawks.

Kyle Ratcliffe, Winnacunnet HS – This forward/center is 6’5”, maybe 6’6”. He averaged over 18 points a game as a sophomore for the Warriors. Best low post scorer in the class, he had 14 points in the 3rd quarter vs. Exeter last season as a junior. He can also hit the mid-range jumper, even though he does it with a very awkward looking shot. Strong, but also very quick for a player his size, often times beating opposing centers down the court for easy baskets.

Harry Knowles, Winnacunnet HS – Another third year starter for Winnacunnet, Knowles also averaged over 18 points as a sophomore. Few wing players around are as physically strong as Knowles, and at 6’2” he has the size to play at the next level as well. He’s a good shooter but a better slasher, and a very tough defender.

Ryan Sweeney, Alvirne HS - A big, strong, tough 6'4" forward/center. Sweeney can hit the 15 foot jumper, and has some nifty moves in the low post. Not the fastest or most athletic kid, but he's a hard worker and not afraid to mix it up and be physical in the paint. A smart, hard nosed player.

To read more of Jeremy's input and analysis about New Hampshire high schools spots check out his blog at http://jeremynhsports.blogspot.com/