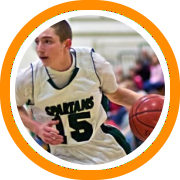 In the NHIAA, Divisions III and IV tipped off last Friday night, while Divisions I and II get underway this Friday evening across the state. The four state champions last season were Merrimack, Portsmouth, Berlin and Moultonborough. There were no surprises, as all four of those teams were expected to be contenders going into the season.

All four of those teams got hit hard by graduation losses, as Merrimack (Tyler Gendron), Portsmouth (Kamahl Walker), Berlin (Curtis Arsenault) and Moultonborough (Marcus Swedberg) are all expected to fall back towards the pack a little. Merrimack not only graduated Gendron, but they also lose star point guard Dimitri Floras who transferred to Vermont Academy and reclassified back to the Class of 2014.

There is still plenty of talent in the NHIAA however. Here’s a look at who the top players and teams will be this season in the state’s four divisions.

Patrick Welch, 6’0 junior (Pembroke) – Welch has been one of the state’s top players and has averaged 20+ points per game in both his freshman and sophomore seasons. He is the protégé of one of Pembroke head coach Matt Alosa – one of the best players to ever come out NH. Welch was already a lethal shooter with great quickness and smooth handle. But now he has gotten bigger and improved his ability to slash to the rim.

Mabor Gabriel, 6’7 junior (Trinity) – Gabriel is once again one of the NHIAA’s top prospects. For a kid his size he possesses exceptional athleticism, he is smooth driving to the rim and muscles smaller opponents on the block. He also has a smooth shooting touch and is a solid shot blocker. He seemed on the verge of a breakout year last year, but didn’t quite dominate as much as expected. Now that he’s a senior it is time for Gabriel to turn all of that potential into production.

Troy Pelletier, 6’3 senior (Manchester Central) – Pelletier is a potential scholarship level prospect in both basketball and football. He had a strong junior season, but really blew up in the state tournament when he dropped 25 points on Trinity to lead Central to the thrilling win. He is excellent when slashing to the rim and can also hit shots from all over the floor.

Brandon Len, 5’9 senior (Souhegan) – A couple years ago Len was a small point guard who was quick, had a tight handle and uncanny passing ability. He still has all of those things (he’s hands down the best passer in the NHIAA) but since then he has also become a lethal scorer. He dropped 50 points in a summer league game this year, and can now score at will on drives or from beyond the arc.
Eric Gendron, 6’3 junior (Merrimack) – When he was out there  during the Final Four last year, playing alongside Dimitri Floras and leading Merrimack to a state title he did not look like a sophomore. Gendron has a maturity and confidence far beyond his years, and his play backs it up. He can score, defend, run the break and like Floras the game just comes easily to him.

Dominic Paradis, 6’4” senior (Spaulding) – known in NH circles as ‘Mr. Fundamental’. Most kids today prefer to make fancy passes, jack up threes and practice windmill dunks. Paradis though is out there setting good screens, boxing out, using ball fakes and banking in shots from 15 feet away. He’s a quiet leader and always comes through in the clutch.

Manchester Central – This is a very fast team that pressures the basketball on defense and moves it well on offense. Troy Pelletier really emerged as one of the top players in the state last season. He’s their go-to guy and can score inside and out. This team also has the luxury of having not one but three kids who would start at point guard for just about any team in the state, with Dawson Dickson, Mike Plentzas and Brett Hanson. Forward Isaiah Joseph is also vastly improved but is awaiting word from the NHIAA on whether he will be eligible for this season.

Spaulding – They have their whole front line and 9 total players returning from a team that won 15 games and made it to the Final Four. Leading the way is Player of the Year candidate Dominic Paradis, who is a four-year starter at forward. Also back are sharpshooting senior Nick MacGregor and junior forward Alex Nevejans, as well as a slew of guards with tournament experience.

Winnacunnet – The Warriors are a team on the rise, no question about it. They are the deepest team in the state, and look for them to use that to their advantage by pressing and running. Sam Knollmeyer, Rich Ruffin, Ben Gareau, Ryan Gigliotti, Chris Doyle and Jordan lead a balanced attack. They have strong guard play, good coaching, depth and speed. That’s not a bad combination.

Trinity – Over the past 10 years no other team in the division has been as consistently good as Trinity. They’re always a title contender and this season is no different. With senior forward Mabor Gabriel and junior wing Carmen Giampetruzzi the Pioneers have a duo that is as good as any in the NHIAA. Add in junior guards Patrick Keefe, Ryan Otis and Brad Rhoades and you have a team capable of making another title run.

Salem – Salem has to replace two kids who were first team all-state players last season (Ben Slepian and Johnny Klecan), but if anyone can do it it’s head coach Rob McLaughlin, who has won Coach of the Year in both seasons at the helm. This year they have a ‘Big 4’ made up of tough, underrated players. They are Andrew Ruffen, Michael Felix, Jack Hartmann and Steve Nugent.

Manchester Memorial – Memorial is a deep, talented unit. Most of their kids have played AAU ball together with the Bishop Elite program. They play basketball year-round and they have been playing together for a long time. The main guys to watch out for are seniors Zoubel Iradakunda and Tong Akot, and sophomores Kabongo Ngalakulondi and Oumaru Kante.

Nashua South – South has a dynamic duo of their own, with the Preston brothers Jack and Tim. Both players have improved a lot since last season and are now two of the top players in the NHIAA. Jack is a 6-foot-5 senior forward and Tim is a 5-foot-10 junior point guard. Another weapon South has is senior forward David Dunham.

Pembroke – Pembroke is the favorite to win D-II, led by the back court of Rene Maher, Patrick Welch and Matt Persons. All three are capable of going off for 20 points on any given night, and down low 6-foot-4 junior Jordan Williams has gotten a lot better. They’re not terribly deep, but their ‘Big 4’ alone will be too much for most teams to handle.

Souhegan – While Pembroke is the definite favorite, Souhegan and Lebanon are right on their heels. The Sabers have a POY candidate of their own in senior point guard Brandon Len. Len had a breakout junior season, and is primed for an even bigger senior year. He’s joined once again by big man Jake Kennedy (committed to play football for UNH), Tyler Ford and Zach Simmonds.

Lebanon – The Raiders have a duo that is as good as any in the division, with senior guard David Hampton and senior forward Matt Cowles. Hampton is a lights out shooter who can handle the basketball under pressure and Cowles is a dominant inside player who can also step out and hit the 15-footer. Eight other kids are also back from last year’s squad, including junior wing Dominick Morrill.

Bishop Brady – The Bell brothers, Jourdain and Joe are a couple of names that you will be hearing about a lot over the next few years. Jourdain was one of the top freshmen in NH last season, and Joe is slated to do the same this year. Add in senior forward Stephen Desmarais and you have the makings of a team that will get out, run and win a lot of games.

Conant – This team has a starting 5 that can play with anyone in the state, regardless of division. They won 5 straight division titles from 2006-2010, and they have the talent to get back to that level. Devin Springfield is the preseason POY, and he is joined by guards Jake Carlson, Robert O’Brien and Kyle Carland and forward Eli Hodgson. They’re all fast and very skilled.

Campbell – the Cougars were good last year and they have a strong core group of players coming back. They’re led by a trio of talented all-state caliber guards in Max Gouveia, Jesiah Wade and Jacob Morgan. They have the potential to be one of the more explosive teams in the state.

Somersworth – the last time Somersworth had this much senior talent on their team they won the state championship (in 2011). They are once again contenders to get there again, led by seniors Drew Francoeur, Jon Cronshaw and Tyler Kretschmar.

Prospect Mountain – Last year’s D-III runners-up returns 3 starters and 8 total players. They have the biggest front line in the division, with Jay Mousseau, Austin Perrin and Logan Roberts. These guys will dominate the boards against everybody, and if they can get enough from their guards they could make another run at it.

Newmarket – They have arguably the two best players in the division with senior guard Christian Hawkins and senior forward Josh Eisfeller. Hawkins has been starting for three years, and Eisfeller is one of the state’s most improved players. They have a strong cast of returning players and a very good coach in Jamie Hayes.

Epping – Epping is not far behind Newmarket at all. In fact, they could also argue that they have the division’s two best players. They are the Stanley brothers, Frank and Jimmy. Both are versatile players who attack the rim and can also shoot it. The Blue Devils return 4 starters and 8 players from last season.

Lisbon – Lisbon has a POY candidate of their own in junior point guard Chad Knighton, and a solid big man in Mike Heath. Both were starters on the Panthers squad that won the D-IV championship in 2011.