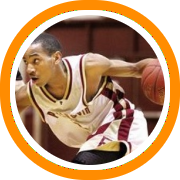 Just like in 2011, the story this year was once again the dominance of the Bishop Elite program. In just their third year of existence, the Bishop took home championships in the 17U and 15U divisions. Also, their 14U team was runner-up and their 16U squad made the semi-finals. Here are the final scores from the 14U-17U title games, followed by a breakdown of the players who stood out this weekend in each class.

Kamahl Walker, 5’10”, Bishop Elite – The explosive, lightning quick Walker is a scoring point guard who pushed the tempo and made plays all weekend. He got to the rim off the bounce by blowing by his defender and made a number of athletic finishes in traffic when met by the held side defense. Walker has a smooth jumper and a quick release, and he hit shots off the catch and the dribble from all over the floor. He was also a menace on the defensive end of the floor, pressuring the basketball and jumping the passing lanes for steals.

Devin Gilligan, 6’4”, Bishop Elite – Gilligan was an absolute bull when driving to the rim, showing a wide array of dribble-drive moves and powerful finishes inside through contact. He was especially dangerous when driving baseline from the corner, and if his defender played back he would stick the three. Gilligan excelled when playing an up-tempo style, as he really got up and pressured the basketball on the full court press and on the other end he not only had some great finishes but also made the extra pass to set up teammates. Gilligan has filled out his frame nicely since enrolling at Kimball Union and really played hard all weekend.

Troy Pelletier, 6’3”, Bishop Elite – A silky smooth wing player, Pelletier showed an effective floor game by being productive without forcing anything. All of his shots came in the flow of the offense, as he slashed to the rim, hit the outside shot and also displayed a dangerous mid-range game. He just has a solid all-around skill set, does the little things well and also got above the rim to finish in transition.

Mabor Gabriel, 6’7”, Bishop Elite – Gabriel is very athletic and agile for a kid his size, put the ball on the floor and go to the rim and also finish inside in traffic after grabbing offensive rebounds. With his size and leaping ability Gabriel is able to get high up over the rim for rebounds and inside finishes.

Brandon Len, 5’9”, NH Titans – Len played a strong all-around game from the point guard position, showing a great burst of speed when leading the break. Finished at the rim but also made a number of great finds, including a no-look dish for a layup after penetrating into the lane. Len has a great handle, he doesn’t turn it over, hit threes off the dribble and also got after it on defense. Made good decisions with the ball and makes his teammates better with court vision and unselfishness.

Majak Wenyin, 6’5”, Bishop Elite – Wenyin is still growing into his body and when you also consider he is 6’5” and can play either guard spot it makes him an intriguing prospect. Wenyin can handle the basketball and shoot it very well for a kid his size and also made some slick passes that led to buckets.

Rene Maher, 5’8”, Granite State Raiders – A pass-first point guard who knows how to distribute the basketball and set teammates up for open looks, Maher effectively ran the point for a strong Raiders team. He controlled the tempo and made good decisions with the basketball, knowing exactly when to dish it and when to look for his own shot. Despite his lack of size Maher is fearless when driving to the rim, and had some big time finishes through contact.

David Hampton, 5’11”, Granite State Raiders – Combo-guard with a dangerous crossover and dribble drive moves and pull-up jumper. Hampton hit shots in bunches beyond the arc as well as the elbows. He is extremely quick, hustled all over the floor and kept the pressure on the defense by getting into the lane and either scoring or finding the open man with pinpoint passes.

Trevor Glassman, 6’2”, Bishop Elite – A deadly long range shooter, Glassman hit the three ball in bunches and when his defender played up on him and got to the rim and made tough finishes.

Richard O’Brien, 5’10”, Bishop Elite – One of the state’s top defenders, O’Brien locked his man down and forced a number of turnovers. He also made some strong drives to the rim to create offense and hit the pull-up jumper as well.

Matt Persons, 6’1”, Granite State Raiders – Fundamentally sound two-guard who is an excellent spot-up shooter. He does a nice job of moving without the ball, finding the open seams in a defense and using good footwork to set up his shot and fire it away in rhythm. Persons always plays hard and try to make the fancy play.

Jack Preston, 6’5”, NH Titans – Preston impressed by going inside, battling for rebounds, going up strong with some tough put-backs and running the floor and finishing above the rim on the break.

Zoubel Iradakunda, 6’2”, Bishop Elite – Athletic wing player who exploded to the rim on drives and also hit the outside shot.

Tyler Livingston, 6’4”, NH Titans – Combo-forward with good size, sturdy frame and solid touch from the outside.

Patrick Welch, 6’0”, Granite State Raiders – Hands down the best sophomore at the tournament, Welch was simply on fire shooting the basketball. He dropped 38 points on Saturday, while playing his fourth game of the day. Welch is quick and moves well without the ball, which allows him to get open for shots. And he doesn’t need much room in order to get the shot off. Welch has a dangerous crossover and is very good at reading his defender to know when to use it and when to pull-up for the jumper.

Cameron Meservey, 6’2”, NH Titans – Meservey caught fire in the 16U title game, draining 5 threes. He was pulling up in transition and hitting threes and also spotting up on the win g and hitting them off the catch. Meservey also showed a solid mid-range game by hitting floaters on the baseline and at the elbows.

Kyle Carland, 5’11”, NH Fire – Played up on the 17U team and did just fine. Carland is an explosive combo-guard who really pushed the tempo and was active on both ends of the floor. On one great play he picked the pocket of the opposing point guard around half court, pushed it hard up the floor on the break and got to the rim before faking the layup and making a great wrap-around dish to a teammate for the bucket. Carland fearlessly attacked the rim and had a number of athletic finishes in traffic.

Isaiah Joseph, 6’2”, NH Titans – Explosive athlete who is 6’2” but plays more like 6’6” with exceptional leaping ability and long arms. He gets way up there on rebounds and finishes at the rim. Joseph goes all out on every play and thrives in an up-tempo game. He traps and sprints all over the floor on defense, hustling after loose balls and always looks to run and push the tempo on offense as well. Joseph can put the ball on the floor and drive as well as hit the three ball.

Dawson Dickson, 5’7”, NH Titans – Crafty point guard who controlled tempo and distributed the basketball. Dickson is a solid floor general with good court vision and also hit the outside shot and played tough defense on the ball.

Carmen Giampetruzzi, 6’2”, NH Titans – Unselfish wing player with strong frame who went hard to the basket and also has great form on jumper.

Robert O’Brien, 6’0”, NH Fire – Showed solid mid-range game by putting the ball on the floor to get to foul line before hitting a couple floaters over the outstretched arms of a defender. O’Brien is a combo-guard who can handle the basketball, shoot it, defend and plays smart.

Andrew Lowman, 6’2”, NH Titans – Did a solid job on the boards and showed a soft touch on baseline jumper.

Jourdain Bell, 6’0”, Bishop Elite – Just a freak athlete, Bell has an extra gear of speed which enables him to cover a ton of ground and make plays all over the floor. Bell plays more like 6’4” with his great leaping ability as he can play the game above the rim. Excels in a fast-pace wide open style of play, Bell is a menace when defending on the press as he picked off a ton of passes which started fast-breaks going back the other way. He can lead the break and make some great dishes or finish on it by getting up high for all-oop finishes.

Kabongo Ngalakulondi, 6’3”, Bishop Elite – Ngalakulondi has great versatility and upside. He played all five positions on the floor and hit a number of threes in the title game. He went hard to the rim with some athletic drives and finishes while also stepping outside and draining the three ball off the catch with a smooth release.

Andrew Houde, 6’4”, Granite State Raiders – Another versatile kid who can play inside or out and has a good combination of size, athleticism and skill. Houde had some great drives and finishes through contact and was also active on the boards.

Brett Hanson, 5’10”, NH Titans – Played up in 16U bracket and more than held his own. Hanson can drive to the rim and finish with either hand, which makes him tough to defend. And although he is quick off the dribble he never gets out of control with the basketball. Hanson also showed a solid mid-range pull-up jumper.

Oumaru Kante, 5’10”, Bishop Elite – Kante does everything you would want a point guard to do. He pushes the tempo, finds the open man, locks down his man on defense and can also score when need be. He hit threes off the catch and made plays off the dribble as well.

Austin Franzen, 5’7”, NH Wave – Exploded for 20+ points in semi-finals, putting the team on his back and nearly leading them to the upset win. Franzen was on fire that game, hitting five 3-pointers, and also hitting pull-up jumpers at the elbows. He has a good understanding of floor spacing and also utilized effective dribble-drive moves to free up his jumper.

Luke Testa, 6’1”, Bishop Elite – A natural two-guard, Testa has good size, athleticism and a well-rounded skill set. He can drive, shoot, pass, defend and rebound. He’s the kind of player who could fit in with any team and any style of play.

Wade Gop, 5’10”, Bishop Elite – Good length out on the perimeter, Gop used the dribble to set up outside shot. At one point he hit one from six feet behind the 3-point line. Gop also made some nice dishes and is a tough, fearless defender.

Alfred Nyonee, 6’2”, Bishop Elite – Physically and athletically gifted forward who battled inside for boards, ran the floor well on the break and pressured the ball well on the press.

Alex Hill, 5’8”, Bishop Elite – Quick combo-guard who really hustled and played on defense and made the extra pass on offense.

Wenyin Gabriel, 6’3”, Bishop Elite – Long, athletic wing who can play inside or out.

Trevan Maughn, 5’6”, Bishop Elite – Combo-guard can really shoot it from the outside and also moved the ball well.

Joe Bell, 5’11”, Bishop Elite – The younger brother of Jourdain Bell is another explosive athlete from the Manchester, NH area. Joe rebounds well, went hard to the rim and showed a solid handle.

Tshiefu Ngalakulondi, 6’3”, Bishop Elite – Strong inside player who also stepped outside and hit a couple clutch threes late in the title game.

Julien Buffalino, 5’9”, GS Gladiators – A scoring machine, Buffalino has great fundamentals, and utilizes dribble-drive moves and ability to read his defender to set himself up for open looks. He has a strong mid-range game , controlled tempo and has a scorer’s mentality.

Jonathin Makori, 5’10”, Bishop Elite – Athletic two-guard who crashed the boards, played with a ton of energy and hit a couple of smooth floaters in the lane.