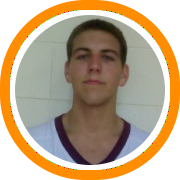 There were so many high-major prospects on Brewster Academy’s team this year that Mitch McGary was really a role player, providing valuable minutes off the bench and changing the game with his size, power, and energy.

His role didn’t deter college coaches though as McGary assembled a recruiting list that read like a who’s who of the nation’s premier programs with UConn, Pittsburgh, Florida, Indiana, West Virginia, Villanova, Wisconsin, Arizona, Purdue, and Miami all battling for a place on his radar.

McGary was one of the standouts at last weekend’s Pittsburgh Jam Fest and promises to return to Brewster Academy as the team’s interior anchor and one of the most widely recruited big men in the country next year.

The state’s second ranked player is Georges Niang, who continues to exceed expectations and prove himself to be one of the most efficient offensive players in New England.  The junior forward’s post-season heroics not only led Tilton to their fourth straight NEPSAC crown but also pushed his recruitment to the high-major level with a handful of BCS level programs now making a push for the Metheun, Mass native.

Another Massachusetts native with high-major recruitment is New Hampton forward Zach Auguste who checks in at third on this list.  One of the most improved players in New England over the last twelve months, Auguste is still only scratching the surface of his potential and has the length, athleticism, and inside-out tools to continue to develop both his overall game and recruitment.

New Hampton’s Olivier Hanlan is one of the best pure point guards in New England’s class of 2012 and the fourth highest rated prospect in New Hampshire.  The Canadian native makes those around him better and is capable of putting points on the board himself and has seen recruitment from the highest levels of college basketball as a result.

We go back to the Tilton School for our fifth ranked player in Domonique Bull, an attacking guard with a long history of creating offense for both himself and others.  Bull was one of the main catalysts for both BABC’s AAU national championship last year as well as Tilton’s NEPSAC crown this season.

Kimball Union forward Jesse Chuku, who missed the season with a serious illness, returns to Kimball Union next year and has the upside to make a big impact as a highly athletic six-foot-seven forward.  The captain of last summer’s Great Britain u18 national team, Chuku checks in at number six on this list.

Phillips Exeter forward Cam Shorey is a powerful and versatile forward drawing division I interest.  The Maine native fills the seventh spot on our rankings followed by another prep school product in St. Paul’s guard Tarik Smith, who has put big numbers on the board throughout his career.

Javon Williams is the top ranked rising senior in the NHIAA and someone who has all the tools to go flying up this list if he can turn his potential into production.  Williams is ranked ninth and followed by Kimball Union’s latest big man Sylvere Aluko who made his debut this season.