New Hampshire has Goodluck in 2013 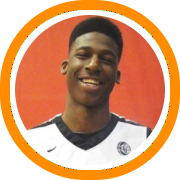 A lot has changed since we last updated the rankings in New Hampshire’s class of 2013, and by lots we mean the departure of the two previous top ranked players in Nerlens Noel and Deonte Bruton as Noel continues the process of rejoining the class of 2012 and Bruton returned home to the Midwest.

Now, the top ranked spot in the state’s junior class belongs to another Tilton big man in Goodluck Okonoboh, the high flying six-foot-nine big man who has been Noel’s running mate on both the high school and the AAU scenes over the past several years.

St. Paul’s Harrison Taggart and Merrimack High School’s Dimitri Floras both showed well enough early in the year to maintain their spots, despite both being out of action at the moment, while Dover’s Mike Leblanc is the second NHIAA prospect to check in to the list.

Devin Gilligan has had a big year for KUA in his first season out of Hopkinton and checks in at number eight while the final two spots in the top ten belong to the duo from Trinity High School in Mabor Gabriel and Travis Descoteaux.