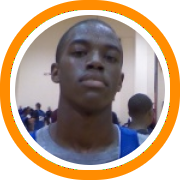 BRIDGEWATER, Mass. This past weekend, young players from the northeast region came together for the New England Regional Junior Phenom Camp sponsored by Adidas.  They ranged from the fifth grade up to freshman year of high school, with our emphasis being on those in the older portion of that group.

From our viewing on Saturday, the talent was very good and it wasn't just at one position.  Oftentimes, guards dominate events like this, with the occasional one dominated by the big men, but this weekend saw a good mix of talent at all of the positions.  Event coordinators Claude Pritchard and Bob Wren were happy with the results, especially since they worked hard to get some of the right kids to come to it.

Among the point guards, a couple of diminutive players stood out.  Taariq Cephas (5'0" PG, New Castle (DE) Pencader Charter HS) consistently beat defenders more with a good hesitation than with his good quickness, and a couple of times he did a nice backdoor cut to get the ball near the hoop.  Shakwan Simkins (5'6" PG, Brockton (MA) High) made a number of nice passes on the day and played well at the position despite struggling with his jumper.  A quietly good floor leader was Zach Hurynowicz (6'0" PG, Burlington (MA) High), who made a number of good passes and was an offensive threat to score but generally was content to run the team.  An even younger guard who played up with the ninth graders, seventh grader Bruce Greene (Ithaca, NY), showed a good dribble in addition to his driving ability.  He's a diminutive player much like Cephas, and with the two playing together, one can imagine the headaches that caused opposing defenses.

The combo guards had their share of talent, with the best one looking like Canadian Chris Joseph (5'11" SG, Montreal (Ont.) La Voie HS).  Athletic and with a very mature body for his age, Joseph looks like he can score in several ways and was constantly involved in the action.  He drove to score at will and made a couple of nice passes, although his decision-making wasn't always the best as at times he forced a play that wasn't there.  Tylon Smith, Jr. (6'0" SG-SF, Manchester (CT) Kingsford Oxford HS) was very active and got a lot of rebounds and loose balls, but struggled to make shots along the way.  He's not the strongest player yet and not the most athletic, but he looks like an intangibles player because he was so often in the play.  Connor Green (6'2" SG, Bedford (NH) High) was not shy putting the ball up, as he kept shooting even through a couple of struggles.  He looks streaky right now, but can surely get the consistency with some work.

There's usually some talent on the wing, and this event was no different.  Kyle Umemba (6'3" SF, Chelsea (MA) Buckingham, Browne and Nichols) is very athletic and showed some skill, although he traveled or nearly traveled a few other times due to shaky footwork when he had the ball and went to make a pass or move.  Like many others here, he's a baby physically and should only get better as he develops.  Nick Higgins (6'3" SF, Albany (NY) High) is athletic and has a good body, and while his skills didn't stand out here, he has the look of someone who can develop into a nice player down the road.  Jared Fahmy (6'5" SF, Bedford (NH) High) was active inside and got his share of rebounds, and at the offensive end he showed a little touch from mid-range.

In the post, there were two who stood above everyone else.  Daniel Pittman (5'11" SF-PF, Hockessin (DE) Delcastle HS) is long and athletic and runs the floor well, and he has a chance as he develops physically.  They listed him as a combo guard, and that might be where he often plays, but here he played inside often and used his athleticism to his advantage by getting out on the break and finishing.  The other post player who shined a great deal was Egi Gjikandi (6'5" PF, Malden (MA) High), who was very active and could not be kept off the boards, especially at the offensive end where he got a number of stickbacks.  The lefty has a little length and showed a decent touch in close when he got the ball in the flow of the offense, and should only get better there.

The camp provided a look at the future in the northeast, and it looks to be bright if it's a good barometer of what is to come in the high school ranks.

Phil Kasiecki is the managing editor of Hoopville.com.  To read more of his stories on high school and college basketball visit www.hoopville.net.