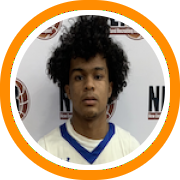 The New York native started his high school career at Molloy High School before transferring to the NEPSAC for the 2019-20 season. He made an immediate impact, being named 1st Team All-Conference in the SENE and finishing as the runner-up for the Player of the Year award.

Expectations were even higher heading into this season following some off-season interest from division I programs and a late growth spurt that added a couple of inches to his frame.

I am a quick point guard who is a team player and can fill the stat sheet on both the defensive and offensive sides of the ball. I am a hard worker who loves to be pushed, works on my weaknesses, and has a strong passion for this game. Furthermore, I can run a team, make the right plays, get my teammates involved and score within the flow of the game. Winning is a team achievement and a great teammate is who I am. Whether the coach needs me to make the game winning assist, the game winning steal or the game winning shot, or if I am needed to dive for a loose ball, I am willing to do whatever it takes to win.

What sets me apart from most is my ability to affect the game defensively and my overall playing experience. From man-to-man, help-side defense, half court, or being able to read the passing lanes, I've always understood the importance of defense. I have been playing basketball at a high level since the third grade. This has given me the chance to be able to travel to different places and play in many different environments over the years. Having this experience has helped me build a strong mentality and I have been able to learn from being in certain situations. Finally, I am a respectful, coachable player who is up for any challenge that comes my way.

"Jeremiah Dorsey is a special talent with a rare combination of outstanding skills, high IQ, incredible instincts and tremendous feel for the game. In every game last year Jeremiah was the best player on the court at only 15 year old playing in the NEPSAC. It was common for opposing coaches to comment to me after games about what a special talent he is. He shoots the ball at a high percentage with unlimited range, he has a tight handle, he plays at 2 speeds, he has great instincts on defense, his decision making is impeccable, he makes everyone around him better and he really knows how to play."
- Aaron Patterson, Head Coach, MacDuffie School

"Jeremiah is a true floor general that plays both sides of the floor. Despite his size, Jeremiah is willing to sacrifice his body on the defensive end. He is very coachable and can really stretch the floor with his shooting ability."
- Edmond Turkson, Head Coach, New York Gauchos

"Jeremiah will thrive in his role as an extension of the head coach on the floor. This is a rare and critical element of a winning Div One team. I've been working with him for quite a while individually on mental and physical skills and acumen. He reminds me of JR Lynch who played two years ago at Univ of Hartford and Kemba Walker when he played at UConn and Mike Trimboli when he played at Univ of Vermont. He is worth two scholarships and I don't state that lightly. I have had many elite guards play for me in high level pro am leagues"
- Steven Sobel, Hartford Pro-Am League

Dorsey is a highly skilled guard whose body is now starting to catch-up to his game. He converted 47% of his three-point attempts last year and yet was far from one-dimensional. He excels at changing pace off the dribble, understands how to create space, and is capable of hitting tough shots both off the dribble and on the move. He's gotten bigger in the last year and has the compact build to allow him to hold his ground through contact even against bigger players.