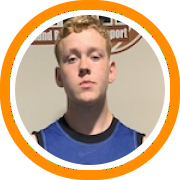 The St. Andrew's School may be known for their guards, but head coach Mike Hart has quietely developed a number of big men who have gone on to play, and thrive at the D1 level.

There's no lack of size on this year's team either with Matt Fegurur, Jordan Brathwaite, and Michael Katsock all along the frontlines.

The future up front though is sophomore Patrick Spenard, a 6-foot-8 big man who has impressed since his arrival and made rapid strides in the last year.

Spenard, who plays his AAU basketball with the BABC, has set a goal to play at the scholarship level, but most importantly, at a high academic college. He appears well on his way at this point with early interest from the likes of Boston University, Holy Cross, and Tampa so far.

"He's an extremely hard-working six-foot-eight stretch-four with a jump-shot. He's very solid defensively and is an outstanding rebounder. He's getting better putting the ball on the floor and I'm excited to be able to work with him for a few years."
- Michael Hart, Head Coach & Athletic Director, St. Andrew's School

"Big Pat came aboard in the spring of '19 when we had our Monday night 'workouts" at Lena Park. Immediately, our staff was impressed with his work ethic, footwork, and toughness. He parlayed that into a spot on the '23 roster that fall. This past summer he went to another level during our outdoor sessions two or three nights a week in the searing summer heat. He's big, strong, and skilled. With his academic package there's no doubt he will be valued by Ivy, Patriot programs. He's 'our type of guy.'"
- Leo Papile, Founder, BABC

Spenard has a combination of size and skill that sets him apart from most other underclassmen big kids. His size immediately changes the game, especially relative to his age group, but there's already inside-out versatility to his game with the potential to add lots more in the years to come. He's a true presence in the post, who is comfortable operating with his back to the basket, but also capable of facing up and stretching the floor. He has good hands, passing potential, and the ability to catch-and-finish quickly around the rim.