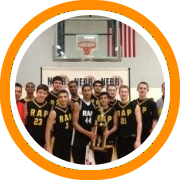 Sunday was exciting day of basketball that saw some of the best teams in the New England region battle it out for bragging rights.

The u16 final saw a matchup of contrasting styles as a bigger, more frontcourt-oriented CBC team took on a smaller, disciplined RAP Elite team from Rochester, NY. Relying on the trio of Joe Wallace, Jay Sarkis, and Tyler Stenglein, RAP pulled away in the second half for a double digit victory. RAP shot the ball very well from the outside and also utilized the fast break to its advantage. Stenglein, a slashing guard, was the leading scorer for RAP and scored in a variety of ways. Wallace, a very versatile player, showed an excellent handle and hit a number of shots from long range.

Ultimately, the undersized and less athletic squad from upstate New York was able to pull off the upset, and in convincing style.  The beauty of RAP Elite’s championship game victory, and entire tournament run, was that they didn’t win with high-flying dunks, deep threes, or eight dribble one-on-one moves. They were able to capture the championship through playing fundamentally sound, disciplined team basketball.

Despite the loss, the weekend was nothing short of a major success for CBC who finished 5-1 while capturing a number of impressive victories.  Derrick Boyd led the way in the championship, scoring 15 points and proving to be very quick off the dribble.  Tyrique Jones, an athletic forward, was strong on the inside for CBC and was the leading rebounder while Arkel Ager continued to make big plays.

Here were the top individual performances we saw on the day:

Marcus Blackwell – East Coast Elite –. After playing very well in their first game, Blackwell was even better against a strong BABC squad. Hitting a number of 3’s to go along with fearless drives to the rim offensively, Blackwell was as good, if not better, defensively guarding players ranging from the point guard to the center over the course of the game.  He was also huge on the glass all day for his team that doesn’t have a man on their roster above 6’5”. Simply put, Blackwell had a fantastic weekend for himself and is carrying a lot of momentum into the start of the April live period next weekend.

Jay Sarkis – RAP Elite – If there were a tournament MVP, Sarkis would get my vote. His presence, skill, leadership, and ability to handle any pressure that an opposing team through at him were the reason RAP Elite captured the championship. He hit shots, created for others, and was the undoubted leader of a very good team. Sarkis was phenomenal the entire weekend.

Joey Wallace – RAP Elite – The second half of RAP Elite’s dynamic backcourt, Wallace was on a mission Sunday to win the championship. The son of former Syracuse standout John Wallace, Joey was the team’s leading scorer averaging better than 15 a game on the weekend. Wallace can score in a variety of ways and is a very good ball handler as well, which allows him to push in transition and make plays for others. He attacks the rim well, and has a very good sense of when to push the tempo with his great speed and athleticism.

Darrick Boyd – CBC – Did a fantastic job running the show for CBC all day long answering the bell whenever they needed him to. He led the team in scoring in their first win of the day in a grind it out victory over a gritty Samford Peace team. He then followed that up starring second half performance versus an athletic and talented Expressions squad that saw him hit four 3’s as well as closing the game out at the free throw line at the end. It was more of the same for Boyd against BABC as he hit a number of long range shots, and methodically beat the BABC pressure with good passing and very good ball handling. Boyd averaged better than 20 points per a game in the four that he played on Sunday, a testament to his consistency and ability to score when need be.

Arkel Ager – CBC – Was solid the entire day for his team, but then really stepped up in their tilt against BABC. Ager was best player on the floor in the semi-final scoring in a variety of ways.  He is best at using his athleticism and length to get to rim and finish, but also knocked down a couple of big shots from three to help CBC secure their impressive win over BABC.

Moustapha Diagne – CBC – Diagne went down with cramps in the semifinals and was never really able to return from that point on, despite his best efforts.  However, his inability to play against BABC or in the championship game did not take away from his impressive performance on the day overall. With Sam Ibiezugbe M.I.A. for the first two games, Diagne was asked to do even more down low for his team and he answered the bell. He combined for more than 10 blocks and easily had double digit rebounds in both contests. Diagne is the best prospect in the 16u field due to his size, skill set, and ability to affect the game in so many ways. He even showed an impressive shooting stroke against Expressions hitting a couple of catch-and –shoot jumpers to go along with closing out the game by going 4-4 from the free throw line.

Terance Mann – BABC – Mann showed off a lot of the skills and natural ability that have college coaches excited to see him play this spring and summer. It was a regular occurrence to see him flying through the air for dunks though out the day including one monster tomahawk dunk that was on a CBC defender. He is extremely long, and while he may be able to finish at the rim over most defenders at this level, he also has all the tools to add a complimenting mid-range game as well.

Jonathan Joseph – BABC – The most impressive thing about Joseph on Sunday was his ability to never seem to be in a rush. He changes speed and direction very well and is always playing at his own pace.  For being an undersized guard, he does a great job of using an array of floaters, pull-ups and quick finishes to be effective inside. Joseph was a spark for BABC’s offense all day and played at very high level.

Juwan Gooding – Expressions – While his shot selection was sometimes questionable, Gooding has a knack for taking and making big shots. In a game where Expressions needed someone to step up to in order to stay close to a tough CBC team, Gooding was the guy who answered the call. He hit deep and contested three’s, found lanes to penetrate the defense, and attacked the CBC big men in their bodies allowing him to get his shot off amongst the tall trees. As Gooding continues to grow and prepare for the college game, there is no doubting his skill or scoring ability.

Saul Phiri – Mass Rivals – Phiri has the makings to be a very, very good prospect down the road. He has a good handle, gets into the lane at will with force, and has the strength to physically punish other guards his age. He’s also able to take smaller guards to the block and dominate with his back to the basket, which will only make him that much more versatile as he continues to develop.

Tyler Stenglein – RAP Elite – A solid player who does a lot of good things on the court for his team. Stenglein is good under pressure, has good hands on defense, and, overall, just makes winning plays.

Unique McLean – Team SCAN – An athletic specimen, McLean made high level plays all weekend at the rim. While he has work to do on his other skills, McLean has the capability of converting a momentum changing dunk at any time.

Damon Wilson – Team SCAN -  A scoring lefty who had a very good day for himself Sunday. Wilson was a bright spot for Team SCAN all weekend long.

Rayshon Miller – Mass Rivals – A creative finisher who scores in bunches. Was effective Sunday, and particularly impressive in transition.