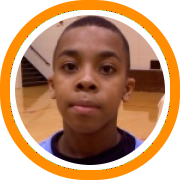 The Connecticut Basketball Club u12 team made a big statement early on, opening with two commanding victories.  But the biggest story was the play of DeJhane James and Desiree Elmore, two girls, who established themselves as the top players in a boys division.  James has remarkable feel for the game for such a young player and she was working her magic throughout both contests, setting up her teammates at will.  Elmore was often the beneficiary as the lefty post player was productive both inside and out.

Also standing out was KeAndre Fair, a point guard with a super tight handle who combined a smooth dribble drive game with great quickness.

Drew Nolan and Marc Crafter were the standouts for a Connecticut Elite team that fell to CBC to open the night.  Nolan is a savvy point guard who consistently ran the show for his club while Crafter made his biggest impact on the defensive end, coming up with three consecutive steals at one point.

The Connecticut Wizards played two tight games, falling to the Bulldogs 50-48 in the u12 division and then scoring a slim victory over the Guardians in the u13 division.  Wagner and Bugnoli stood out for the u12 team while the u13 team utilizing a well balanced offense to earn their victory, as they shared the ball extremely well throughout all 32 minutes.

The Connecticut Mavs also impressed on Friday as they opened with a big win over another CT Wizards team.  Bobby Archiera and William Dalton formed a devastating inside-out tandem for the Mavs as Archiera dominated inside the paint and Dalton penetrated at will from the perimeter.

Other notable outcomes on the opening night included a win from Premiere Hoops over the Bulldogs with a game high points coming from Bombart.