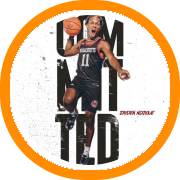 Ndjigue reclassified to 2023 when coming to Rivers in the fall of 2020. His first season was unfortunately wiped out by the COVID-19 Pandemic.

He had a standout junior season, earning All-NEPSAC honors en route to helping the Red Wings win the Class B championship.

On the AAU circuit with Mass Rivals, Ndjigue played an important role on a team with multiple other high major prospects. He helped them go 15-4 in the Adidas 3SSB regular season and finish off the July live periods winning the 3SSB Open Championship in Los Angeles, California.

“Jayden is one of the very few prospects that come along in our coaching career who make so many winning plays game after game,” said Mass Rivals head coach Vin Pastore. His height, wingspan, lateral quickness, and strength make him the best defender I have ever had the opportunity to coach.”

“His ability to score the basketball above the rim and yet protect the rim down the other end makes him even more special. Most importantly, Jayden’s intangibles are off the charts. He has great work ethic, leadership, skills, never stops communicating, and best of all, he plays basketball with one purpose in mind, to win games.”

“Jayden is one of the best teammates and hardest workers I have been around,” said Rivers School head coach Keith Zalaski. Through his work, enthusiasm, and competitiveness, he motivates others to do the same.”

“His impact on our program has been immeasurable, and I am excited to see him do the same at UMass. He is a winner in every sense of the word, and I have loved being around such a tremendous person and player.”