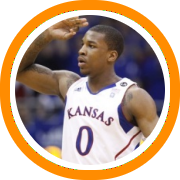 One of three New England teams in the field, Vermont is loaded with local products including three natives of the Green Mountain State in senior swingman Matt Glass, senior forward Pat Bergmann, and sophomore forward Clancy Rugg. Glass and Rugg are both NMH products as is back-up point guard Josh Elbaum. Rhode Island native Ben Crenca is a Worcester Academy alum and Luke Apfeld is a graduate of Brewster Academy.

The second seeded Jayhawks have two former Brewster Academy products on their team including junior forward Thomas Robinson, the Big 12 Player of the Year and one of the leading contenders for national player of the year. Worcester native Naadir Tharpe is in his freshman season as the team’s back-up point guard.

Massachusetts native and St. Mark’s alum Nate Lubick is in his sophomore season and a key member of the Hoyas frontcourt rotation, averaging 18 minutes of action per game while also serving as one of the team’s best interior rebounders and passers.

The Wolverines have a trio of former New England products beginning with New Hampton graduate and Reading, Massachusetts native Evan Smotrycz, who is one of the team’s most skilled and consistent frontcourt products. Blake McLimons, who spent a post-graduate year at Worcester Academy, is one of the team’s three-point specialists while former Phillips Exeter post-graduate Josh Bartelstein saw action in 11 games this season.

This game only has a single New England product and it is Temple freshman Nick Pendergast, a native of Connecticut who spent two years at the Kent School before graduating last year.

Purdue’s freshman walk-on Neal Beshears is an Indiana native who did a post-graduate year at MCI last year.