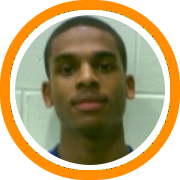 Upsets were the story of the weekend at the Naismith Memorial Hall of Fame Classic as a virtual unknown program won the 17u crown and a local 16u team made a statement by plowing through the field to earn the 16u title.

The New England Select program is still in their infant stages after being founded only a few short years ago. But this weekend when they won the 16u championship, they proved that they definitely belong among the region’s best. For the second time in as many weeks the team was led by the tandem of 6’5 Brimmer & May forward Kyle Casey and 6’7 Nobles forward Tucker Halpern.

Casey (pictured above) was impressive throughout the weekend as he combined his always impressive defense with an increased willingness to assert himself on the offensive end. Casey continued to show a great shooting touch from the perimeter while also looking to attack the rim more, especially in the open floor. In fact, in the team’s first game of the weekend, Casey brought the crowd to its feet when he took off from just inside the free-throw line for a tremendous break away dunk. Casey is said to be generating interest from Dusquesne, Massachusetts, Pennsyvlania, and Rice among others.

Halpern was the ultimate team player throughout the weekend as he found opportunities to showcase his rare abilities while staying within his team’s offensive sets. With his unique blend of size and skill he is the prototypical inside out threat who is able to knock down three-pointer after three-pointer as well as rebound and score in the crowded lane. Halpern is said to be hearing from some of the same schools as Casey with Davidson, Pennsylvania, & Rice all keeping in close contact in addition to schools like Stanford and Notre Dame.

Select’s road to the championship was not an easy one as they were forced to contend with two of New England’s most established programs in Connecticut Basketball Club and the Rhode Island Hawks in the semi-finals and finals respectively. In the first of those two contests Select was able to hang on for a 9 point victory over CBC, despite the solid play of 5’8 sophomore point guard Luke Mattarazzo. In the finals Select made quite a statement with a 58-39 victory over the Hawks. Casey led the way with 15 points while Halpern scored 12 and 5’10 sophomore point guard Greg Jacques added 10. The Hawks were led by 6’6 freshman forward Jamee Jackson who finished with 15 points.

After holding a lead that hovered around double digits for the majority of the game Select found their lead cut to 41-36 after Jackson converted an old fashioned three-point play with 9:15 left in the second half. But that is as close as the Hawks would get as Casey scored on the next possession with an impressive one dribble jump stop move in the lane. On the following possession Halpern would extend the lead back to double figures with his second three-pointer of the game after using a hard jab step to give himself enough room to fire. From there the lead would consistently increase until Select had secured their title with a 19 point victory.

While Select’s dominance of the 16u bracket was certainly a major statement, CT Thunder’s ability to capture the 17u crown was a major upset to say the least. With a field including the Albany City Rocks, Connecticut Select, Connecticut Basketball Club, Rhode Island Hawks, BC Eagles, and many more talented teams it is safe to say that the Thunder was not considered a major contender at the beginning of the weekend.

But the team based out of the greater Bridgeport area seemed to relish their underdog role as they advanced all the way to the finals on center court of the Hall of Fame. In the last game of the weekend the Thunder was able to hang on for a hard fought 49-48 victory over Connecticut Skills. The Thunder was led throughout the weekend by the interior play of Markus McElveen, from Bridgton Academy in Maine, who was the high man with 16 points in the championship game. Despite the fact that he is said to be a high major football prospect, McElveen was the best big man on the floor for much of the day on Sunday as he showed some crafty footwork and a soft touch in the lane. Also impressive for the Thunder was the backcourt of Tavonne Reid from Fairfield Prep and Chris Corvese from Wilton High School. With his quickness and first rate ball handling, Reid was able to break his man down off the dribble throughout the weekend while Corvese also showed a proficiency to get to the rim. Dexter Williamson from Bassick High School also played well as he showed his impressive athleticism in addition to his ability to knock down the elbow jumper.

Here is a look at some other players who impressed over the weekend:

Kevin Donahue – RI Hawks Red
Had the tournament given out an MVP award it likely would have gone Donahue’s way as he dominated the action during pool play helping his team come out on top of what was likely the deepest pool in the field. Donahue’s point totals included 33 against CT Select, 32 against CT Huskies, 35 against St. Bruno Canada, and an incredible 42 against the Albany City Rocks. The 6’0 junior guard from Killingly High School was doing a little bit of everything this weekend as he knocked down shots from behind the three point line, got into the lane while staying under control, and finished with a variety of pull-up jumpers and runners.

David Rufful & Adalberto Bueno – RI Hawks Black
Both members of the duo looked impressive at times for a Hawks squad that fell in the quarter-finals to the Thunder. Rufful knocked down several long range jumpers, showed an increased ability to attack the basket off the bounce, and even got up and finished above the rim on more than one occasion. Bueno was at his best when slashing to the basket as he utilized a quick first step and an ability to cover a lot of ground with only one dribble to get past his man.

Jeremi Hall – RI Hawks White
Out of the 8 pools in the 17u division, 3 of them were won by teams in the RI Hawks program. Jeremi Hall, a 6’0 senior guard, was the catalyst behind the white team. Not only did the lefty lead his team to a first place finish in pool play but they also advanced all the way to the semi-finals before falling to the eventual champions. In that game Hall was on fire from behind the three-point line as he knocked down shot after shot from deep range.

Ephraim Herskovitz, Jake Gruber, & Ryan Minihan – Boston Bounce
Boston Bounce had a very difficult schedule to open the tournament as they faced CBC and the RI Hawks in their first two games. Despite losing both contests the Bounce played well and took both teams to the limit. In the game against the Hawks, Herskovitz and Gruber put on a shooting clinic from behind the three-point line as they combined for 13 three-pointers (6 for Herskovitz & 7 for Gruber). Meanwhile with the floor spread Miniham was able to establish himself in the lane as he scored 19 points in the effort.

Steven Samuels – Windsor Warriors
The 6’4 sophomore guard from Windsor High School pulled out all the stops in his team’s first round victory on Saturday as he went for a game high 33 points. With his quickness and great length he was able to apply a good deal of defensive pressure to pick up steals and ignite his team’s transition attack. In the open floor he attacked the rim at will, finishes high above the cup with either hand, and even knocked down the occasional jump shot. He has gotten worlds better in the last 6 months and is definitely a player who should be monitored closely by division I schools.

Robert Harrigan – CT Future Stars
The 6’5 face up four man from St. Joseph’s high school is another player who shot the ball exceptionally well from behind the three-point line. On Saturday he knocked down 5 of his 7 attempts from long range to score 15 points en route to leading his Future Stars team to a tough victory over the Springfield Storm. Harrigan, who is said to be receiving interest from some division I programs in the Patriot League, caught the attention of many of the college coaches in attendance with his play on Saturday.

Chris Cagle – CT Skills
The 6’5 senior forward was the driving force behind his team’s trip to the tournament finals. Cagle utilized his tremendous strength and athleticism to dominate play on the interior while also showing an improved shooting touch from 15-18 feet. Cagle would be a great late season pick up for a division III program as he is set to graduate from Hillhouse High School next month and is said to be still open in his recruiting.

Martin Payne – Springfield Storm
Payne was unconscious from behind the three-point line as the Storm tried to stay with the Future Stars. The lefty made shots from virtually every spot on the court, with a hand in his face on most occasions. Simply put…he was in the zone, and it was quite a fun performance to watch in person. The 5’11 guard finished with 24 points including 6 makes from down town.

Kory Lenz – Central CT Hoopstars
He was his team’s most consistent performer the entire weekend and erupted for a 23 point performance in their final game of the day on Saturday. The 6’4 forward from Hamden Hall was crafty inside finishing at a variety of angles, a consistent threat from behind the three-point line, and a player who seemed to be looking for the ball in big moments down the stretch.

Joe Sharkey – RI Hawks 16u
Sharkey appears to be making a smooth transition to the point guard position. His handle is noticeable tighter as is his physique, which now features some obvious muscle definition. It is also official that Sharkey is headed to Northfield Mount Hermon next year where he will spend the next three or fours years.

Stop me if you have heard this before:
David Gibbs, Tyrone Gardner, Josh Turner, and Mike Marra. They are good. Very good.