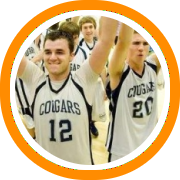 The stage was set for a dramatic state final.

Mount Mansfield and Rice Memorial were undeniably the top teams in the state of Vermont, having split their season series but going otherwise undefeated.

The setting was the University of Vermont’s Patrick Gymnasium, and the walls were lined with fans in support of both teams, creating an environment fitting for the championship rivalry.

While Mount Mansfield was the more experienced of the two teams, Rice was the reigning state champions, and in the first half it looked like last year’s history was bound to repeat itself.

The Green Knights took a five point lead into the locker room after holding Mount Mansfield to just five of 24 shooting from the floor.

The second half was a far different story as the Cougars locked in defensively, slowed the tempo of the game, and utilized a decisive third quarter run to turn the tides.

Senior Troy Springer, who battled flu like symptoms throughout the day, got the third quarter run going with a three-pointer.  Mount Mansfield would score 13 more points in the third quarter while holding Rice scoreless for 5:27, ultimately winning the quarter by a 16-4 margin.

That run proved to be the difference in the game.  Springer’s senior counterpart Tom Lacy was also critical, finishing with a double-double of 11 points and 10 rebounds, while Eric Suder added 8 points and 8 rebounds.

Casey Tipson scored a team high 16 points for Rice, but it wasn’t enough as Mount Mansfield would continue to control the game in the fourth quarter and ultimately deliver a 41-34 win for the school’s fourth state title and first since 2005.