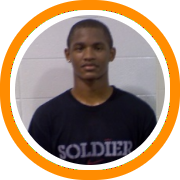 Jason Morris came to New England four years ago from his home in Augusta, Georgia.  Now after spending four years at the Hotchkiss School, Morris is heading back to his home state after committing to Georgia Tech this weekend while in Atlanta.

“It could have gone either way with Georgia Tech or Clemson,” Morris told Jackets Online.  “I was laying in my bed in my hotel room in Atlanta and it just felt right in my gut.  I knew I wanted to play at Georgia Tech.  I knew this is where I wanted to be for the next four years.”

Ultimately, Morris selected the Yellow Jackets over Clemson and Stanford, and it appears the opportunity to play close to home was a major factor.

“My parents seemed a lot more comfortable in Atlanta, it is like home to me,” he said.

Morris is expected to sign his National Letter of Intent this week during the early signing period.

The six-foot-five swingman is one of the premier athletes in the country and has been a consensus top 100 player in the nation throughout virtually his entire high school career.  He’s earned a variety of other accolades in that time, playing in events like the NBA Players Association Camp, Lebron James Skills Academy, and Adidas Nationas Global Challenge.

He is the first player to commit to Georgia Tech in the class of 2010.