McCreesh Moving On to Lewisburg Next Fall 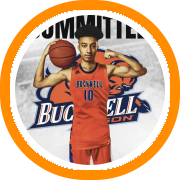 McCreesh made the most of his junior year for Hotchkiss after COVID-19 took away his season in 2020-2021. He averaged 15 points, 5 rebounds, and 4 assisists for a Bearcats team that won the Class A Championship. McCreesh also was named to the All-NEPSAC team and earned Tournmament MVP honors averaging 22 points during the three games.

He competed on the Under Armour Association circuit with Riverside Hawks.

"Brandon is one of the most consistent combo guards I have ever coached," said former Hotchkiss head coach Yassine Talhaoui. Bucknell is not only getting a consistent scorer who shot over 60%, they are also gaining an elite defender. Most importantly, his work ethic and strong character have proven to be crucial to a team's success (whether in high school or AAU) - this will not change at the next level."

"Over the years, the 2022 NEPSAC Tournament MVP has developed into a consistent shooter, high IQ guard with the ability to dictate the speed of a game, and player who can impact the game on or off the ball. I am extremely proud of the scholar-athlete Brandon has developed into and excited to see him continue to develop under Coach Davis and his staff at Bucknell. Bucknell has landed a winner."

"Brandon is a perfect example of a team player," said Riverside Hawks athletic director Danny Colon. He is someone who allows the game to come to him and always comes to work with his hard hat on whether you are asking him to facilitate, score, or guard the other team's best player. Brandon gives it 110% with no plays off."

"I believe Brandon will flourish at Bucknell and Coach Davis' system. He is a two way wing who plays effectively off the ball when coming off screens."

McCreesh is the third member of Hotchkiss School's 2023 class to finalize their college plans. He is the second to commit to a Division One school.