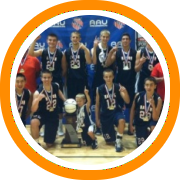 New England was well represented when pool play turned to bracket play at the first ever AAU 12th grade nationals.

Connecticut Kingz, Connecticut Gold, and Maine Mac had all won their pools to advance to the gold bracket while MB Nation did as well by finishing second in their pool.

After dropping the first game of pool play, the Nation rattled off six straight wins en route to the championship, utilizing their trademark dribble drive system to space the court with shooters, open up driving lanes, and force the opposition to pick their poison.

Tru Ballers would be first up and the Nation would hold them off with by a score of 68-63.  The quarterfinals would see a match-up with the Jacksonville Heat, but this was hardly a close one as Jacksonville was pounded by a 77-38 margin behind Harry Rafferty’s latest explosion from behind the arc as he went for eight three-pointers and 30 points.  Alex Furness and Chris Braley added 22 and 18 respectively.

The semifinals saw a match-up with another local New England club, Connecticut Gold, who were on an impressive run of their own having rattled off five straight wins, the last of which came over Maine Mac 55-45 in another quarterfinal.

The Nation got off to a slow start in the semis, going 3-16 from behind the arc to start the game, but utilized a third quarter run to seize the lead once and for all, ultimately moving on to score a 50-46 win and propel them to the finals.  Furness and Rafferty led the way with 16 and 14 while Dustin Cole, who only recently returned from a sprained ankle, scored 9 and gave the team a big boost on both ends.

Waiting for the Nation in the finals was Top Magic, riding a wave of momentum from six straight wins including a semifinal victory over the Connecticut Kingz.  MB Nation went up 16-10 through the first quarter and went into halftime with a 27-20 edge.  The lead was ten going into the fourth quarter when the teams began exchanging baskets only to see Braley and Will Defanti both foul out.  Cole would be sent to the bench with his fifth foul making the final moments full of drama, but ultimately the Nation would pull off a 57-46 win to take the national championship.  Furness would lead the way with 21 points and 8 assists while Cole would again step up with 14.