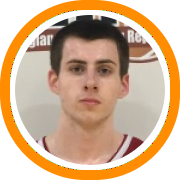 The 6-foot-6 forward and New York native was in his second season at the Master's School where he had earned All-NEPSAC honorable mention in each of the last two seasons.

One of the premier three-point shooters and floor-spacers in the NEPSAC, Warnock converted 48% of his attempts from behind the arc this year while averaging 13 points and 8 rebounds.

"I couldn't be more proud for Harry and his family," Master's head coach Tobias Ceasar said. "He came in as a junior, put his hard hat on and worked every day. He never complained and was voted captain by his peers both years here at Master's. I've always said if I had five Harrys on the floor I would be in a coaching Utopia. Post is getting a phenomenal young man, solid student, and high character person."