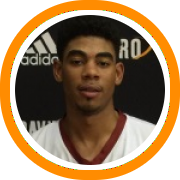 Master's School post-graduate Dimencio Vaughn made a verbal commitment to Rider on Monday.

The 6-foot-4 swingman spent his senior season playing alongside Malik Newman at Jackson Callaway High School in Mississippi but previously attended Thurgood Marshall High School in New York and came up the ranks with the New York Lightning, spending the last two summers competing on the EYBL circuit.

Vaughn emerged as one of the major surprises of the 2015 EYBL regular season, averaging almost 15 points per game to help lead the Lightning to a spot in the EYBL Finals at the Nike Peach Jam.

He's had a similar effect since arriving at Master's as he's helped the team get off to a 5-2 record including wins over Wilbraham & Monson and Worcester Academy.

A powerful and athletic southpaw who is capable of playing and defending multiple positions, Vaughn has also taken his offensive game to new levels with an evolving perimeter skill set to match his productivity attacking the rim.

He joins Sam Ibiezugbe (Monmouth) and Andrew Garcia (Stony Brook) to become the third Master's product to commit to a division I school in the class of 2016.