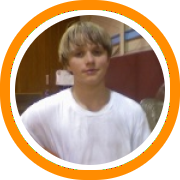 It was three years ago when we first walked into the Northfield Mount Hermon gym for a fall workout.  NMH was loaded at the time with future Notre Dame forward Tyrone Nash along with current Atlantic 10 products Gary Correia and the Williams twins.

But one of the players who caught our eye was barely five-feet tall.  Shooting on one of the corner hoops on the side court was Makai Mason.  At the time he could barely reach the hoop from outside of the paint but he absolutely amazed us with his ball-handling ability for such a little guy.  We later learned that he had already traveled to California for the Adidas Phenom Camp and been nationally ranked by scouting services including Hoop Scoop Online.

Since that time Mason hasn’t been quite as active on the national circuit, but has begun to make a name for himself in New England.  In fact, last spring we caught wind of a 40 point performance against BABC and a 38 point game against CBC while running with Indoor Action.

And when the New England Recruiting Report returned to the Northfield Mount Hermon gym earlier this week for a look at NMH’s latest talented group, we once again found Makai shooting around on one of the side baskets.  But he was hardly the little guy we remembered from two years ago.  Now, he was a five-foot-seven guard who showed the shooting touch to match his handle, in addition to the bounce to grab the rim.

About an hour into the workout, Makai got the chance he was looking for as he got to sub into the 5 on 5 pick-up game with the NMH players.

Rising senior Laurent Rivard immediately came over to head coach John Carroll and asked if they were to take it easy on the youngster.

Making the challenge even more daunting for Mason was the fact that he was matched up with NMH’s incoming junior point guard Aaron Cosby, who already boasts a scholarship offer from the University of Indiana.

The first time Cosby touched the ball he drove it by Mason to the rim.  On the next possession he brought him to the low post and overpowered him.

But on the following defensive possession, Cosby got something he wasn’t expecting.

Mason caught the ball on the wing and Cosby got into half of a defensive stance.  The youngster drove it right at him, shook him with a little stutter step, and then drilled an 18 footer.

And with that Makai Mason had arrived.  No longer was he the little kid shooting around on the side, now he was playing with, and scoring against, the big boys.