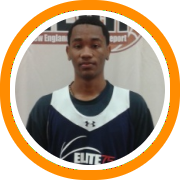 The fifth annual New England Elite 75 Showcase – Frosh/Soph Edition was filled with players who arrived on Saturday looking to make a statement, but in the end it was two players in particular, who stood out above the field in the class of 2015.

Terance Mann - The silky-smooth 2-guard spent Saturday afternoon scoring the ball relentlessly from all over the floor.  In addition to showing a tightened handle and improved ability to facilitate from the backcourt, Mann's body has really developed in the past year and this has taken his rating on the Explosiveness Scale to a whole new level.  As he showcased Saturday, Mann is a now perpetual poster-threat who could raise up and attack the rim in traffic at any time, a characteristic similar to one of his teammates at Tilton whose name escapes me.

Luis Montero - Playing for the first time on a well-populated New England Stage, Monteiro wowed onlookers with his oozing combination of size, length, skill, athleticism, fluidity and charisma.  He broke defenders down off the dribble with ease, shook them for step-back jumpers, and rained threes with equal consistency.  The following highlight reel shows his work not only in Saturday’s Elite 75 but also in a Wilbraham & Monson open gym as well as August’s Scott Hazelton Basketball Camp.

Stay tuned later today for a complete breakdown of all the top performers in the 2015 class.