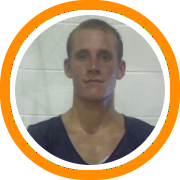 St. Anselm’s just got a steal.

“They started recruiting me in September during open gym and I wasn’t thinking much about it because I came here to go division I,” Mabrey said, “but they kept persistently calling and talking about the role that I would fill up there.”
Finally last week, Mabrey visited the New Hampshire campus and his reaction surprised even himself.

“I went up last Friday to check it out and it just had everything that I wanted in a school.” Mabrey said, comparing it to his former high school, Christian Brothers Academy in New Jersey.

“It reminded me a lot of CBA,” he said.  “I really liked my old high school and all the kids were just like the kids in my old school, the set up was the same, and it’s not ridiculously big but at the same time it’s big enough where I could go somewhere new on campus and see new faces.”

The basketball situation was also appealing to Mabrey as he’ll have an opportunity to continue to play the role of a scorer.

“I used to be a point guard but this year [St. Thomas More] Coach [Jere] Quinn put me at the two and let me shoot the ball more and look to score,” Mabrey said.  “Next year they said I would play that scoring role because they’re losing Tom Baudinet and his 20 points per game so they need me to fill that role.  That’s something I’ve always wanted to do.”

St. Anselm’s up-tempo style of play also appealed to Mabrey.  The Hawks are averaging over 80 points per game this year and are one of the highest scoring teams in the Northeast-10.

“That’s when I am the best and able to score the easiest,” Mabrey said.

The post-graduate from New Jersey hasn’t had any problem scoring the ball this season at St. Thomas More, where he immediately cracked the team’s starting line-up and has averaged 14 points per game.

Mabrey has also shown an ability to raise the level of his game when the lights are on the brightest and after a 32 point outing against Princeton Day Academy at the National Prep Showcase, a 29 point performance against Ricardo Ledo and South Kent, and numerous other 20 point outings, it didn’t seem that St. Anselm’s or any other division II school would have much of a chance as division I programs including Davidson, Wofford, Coastal Carolina, Albany, and others all showed interest.

But the hard work of St. Anselm’s head coach Keith Dickson and assistant Jimmy Moore was enough to get Mabrey on campus, which is where he will stay for the next four years and very possibly develop into one of the NE-10’s top guards.