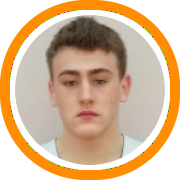 Commitments have been flying off the board at a rapid rate in recent weeks and in the process some division III schools have gotten some steals.

One of the most notable recent commitments is that of Bridgton Academy post-graduate Jack Lesure to Hobart College where he will follow in the foot-steps of his father and coach, Whit Lesure.

Playing for your father can be difficult, no matter who you are, but Jack Lesure is unique. You won’t find many young players you can match the consistency of his work ethic, toughness, or intellect for the game. He’s also a great teammate and a clear leader on the floor.

Prior to spending his post-graduate year at Bridgton, Jack previously starred at nearby Lake Region High School where he led his team to a state championship in 2016, was named the Most Outstanding Player in Southern Maine B in the process, as well as a finalist for Maine’s Mr. Basketball Award.

“Jack is very excited for the opportunities at Hobart,” Whit Lesure said. “He’s bound to exceed anything I ever did there. I’m confident that Maine toughness travels well and you can be he will pack a tremendous amount of state and local pride in his bags when he heads off to school.”