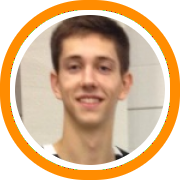 New Hampton forward Mike Leblanc is coming off a very successful summer with the Rhode Island Hawks and is now seeing his recruitment go to a higher level as a result.

Leblanc came into the summer with scholarship offers from New Hampshire, Brown, and Binghamton but has since added additional offers from Princeton, Vermont, Yale, and most recently, Rice University, a top academic school that competes in Conference USA.

While the combination of academics and athletics is the obvious common denominator on his list, Leblanc told the New England Recruiting Report that it didn’t necessarily have to be an Ivy League school to satisfy that demand.

He’s now scheduled to take official visits to Princeton (September 13th), Rice (September 20th), Yale (September 27th) and Brown (October 4th), and while he stopped short of calling that his final list after receiving recent interest from George Washington and Marist, he said he does expect to make a decision before the beginning of the prep school season.

As for the improvements that led to the surge in his recruitment, Leblanc credited his improved offensive versatility.
“I think that I’ve become more of a scorer and more versatile than what I was previously,” he told NERR.  “I think that I used to be just a shooter and now I’ve expanded my game to be able to drive and distribute the ball.”

In truth, Leblanc’s improvements seemed to be across the board this summer.  He was stronger physically, playing with obvious confidence, and so far more dangerous.  He not only made shots, but made tough shots, from behind the three-point line, and while he was more of a threat off the dribble, he was also more under control while in attack mode, more balanced inside the lane, and consequently a much improved finisher.

The end result was a successful month of basketball that has now led to his choice of top academic division I programs.