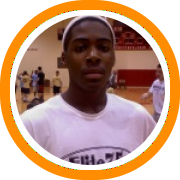 From the team in the white jerseys, here are the players that shined:

Jared Rosenblatt, 5’2, point guard, 8th grader, Avon Middle School, Avon, CT
Jared’s coaches praised him as a very coachable player, diligent, and fearless.  He excelled at moving without the ball offensively and did a great job setting screens for his point man against players much bigger than him.

Andrew Julian, guard, 6th grader, Boston College High School, Boston, MA
A guard with great basketball sense and court awareness, Julian made very smart and accurate passes to his teammates and took care of the basketball.  He knew how to throw nearly every type of pass that exists in basketball.

Tommy Mobley, 5’10, forward, 7th grader, Day Middle School, Newton, MA
A 5’10 post player, Mobley was deceptively strong when battling for rebounds and even more strong once he grabbed the ball as opposing players were not able to rip the ball loose.  His mentally to get dirty on the trenches earned him all-star status.

Winston Morgan, guard, 8th grader, Hartford, CT
Morgan is a very entertaining athlete on the court with a rare ability to quickly burst past defenders and laterally slash into the lane then dish the ball to a wingman for a jump shot.  He also used his great speed as a defensive weapon quickly getting back on defense in transition.

Jack Moyer, 5’4, guard, 7th grader, Driscoll, Brookline, MA
A solid shooter, Moyer used his space on the wings wisely and moved well without the ball cutting to the outside for an open jumper which very often found its mark.

Brian Mukasa, 5’7, point guard, 8th grader, Sharon Middle School, Sharon, MA
Mukasa has very good overall skill as a basketball player with natural quickness and confidence shooting the ball.  He is also a defensive stopper that defends 1 on 1 on the perimeter very well.

Jared Wilson-Frame, 6’1, guard/forward, 8th grader, Breakthrough Magnet, Windsor, CT (pictured)
Jared Wilson-Frame is an incredible athlete with an outstanding vertical leap and ability to flash past his defenders when driving to the hoop. He also has a textbook shooting form and can score on the low post.  For his age, Jared is in a class of his own as an athlete.

Nate Freeman, 5’0, point guard, 6th grader, Sudbury Middle School, Sudbury, MA
Freeman is a very quick point guard with great court awareness and elusiveness to his defenders.  He can always find the open space on the court and makes poised decisions when passing the ball.  On the outside he can also pull up for a long or mid-range jump shot which more times than not finds the net.

Caleb Green, 5’0, point guard, 6th, Londonderry Middle School, Londonderry, NH
An all-star by at the end of the day, Green defensively never gave his man an inch space sometimes forcing bad passes resulting in turnovers.  Offensively he used his quick burst speed to move well without the ball and find the open spaces on the court or cutting into the paint.

Markus Neale, 6’0, guard, 8th grader, McCormack Middle School, Boston, MA
A pure athletic guard, Neale has it all.  He is a speedy runner that loves to push the tempo in transition and if extremely tough to catch when he finds open space.  He has great passing and shooting fundamentals along with the ability to create steals on defense.

Steven Passatempo, 5’8, guard, 8th grader, St. Raphael’s School, Medford, MA
A solid wingman, Passatempo displayed a shooters mentality looking to pull up from the wing.  He knew how to follow his shot very well crashing the boards facing off against bigger forwards and was very good for his size winning his share of 1 on 1 battles on the glass.

Lucas Prioli, 6’1, guard/forward, 8th grader, Beverly Middle School, Beverly, MA
A solid wingman that can also play the post, Prioli looks to drive the ball if he sees a lane and attacks the shot blocker.  On the post he knows to use the drop step to create a layup angle and stays strong when fighting for inside position for boards.

Luis Rodriguez, 6’1, guard, 8th grader, Chestnut Middle School, Springfield, MA
Luis is simply a pleasure to watch on the court for any coach.  On defense he was always the first man to step up to the ball-handler and get into textbook defensive position.  Offensively he used his long arms and outstanding vertical leap to attack the hoop and score.

Dimitri Rosa, 5’2, guard, 6th grader, Tiverton Middle School, Tiverton, RI
A very good offensive player, Rosa can pull the shooting trigger at any time he has the ball which if not respected can find its target.  If his shot option is not there, he is very smart passing ball finding the open man and not forcing anything.

Brendan Patch, 4’10, guard, 6th grader, St. Mary Sacred Heart, North Attleboro, MA
A very smart ball player with a great feel for the game, Patch always stayed strong with the basketball and never backed down.  He also had a deceptively accurate shot from mid to long range which the opposition after a while began to respect.

Lavrone Green, 5’5, shooting guard, 8th grader, Sage Park Middle School, Windsor, CT
Lavrone immediately established himself on the court as a speed guard with a great outside jump shot.  He amazed his coaches showing true fearlessness driving towards two forwards much larger than himself, and finishing the bucket from a tough angle off the glass.

Mike Rodriguez, 5’7, guard, 8th grader, Lewis Middle School, Roxbury, MA
A great passing guard, Mike first and foremost did an outstanding job of taking care of the basketball.  His quickness and speed allowed him to get into transition and used his great court awareness to always make his passes connect.  His great overall guard play made him an all-star.

Ryan Rondeau, guard/forward, 7th grader, Pelham Memorial, Pelham, NH
Rondeau is a very good overall athlete running the floor exceptionally well and using his strong leaping ability to go up for a rebound or a shot block.  On defense he constantly hustled to gain possession of the ball.

Jake Ross, 5’8, guard, 7th grader, John F. Kennedy Middle School, Northampton, MA
A solid guard, Jake Ross displayed good ball-handling skills and a solid mid-range jump shot.  He also showed that he was not afraid to drive if he had to and played at the opposite end as a scrappy defender.

Kyle Ryder, 5’11, guard, 8th grader, Barnstable, MA
Ryder’s 15-20 ft mid-range jumper was deadly accurate from anywhere from the paint to the base line.  He was able to get with a deceptively quick  burst of acceleration off the wing.

Angel Santos, 5’10, guard/forward, 8th grader, Newton Middle School, Newton, CT
Santos plays as a wingman that looks to drive base line and dish the ball to a teammate.  On defense he played hard and hustled for the ball.  He more importantly showed class on the basketball court, helping up down teammates and opposing players and showing each of them respect as competitors.

Nate Woodason, 6’3, guard/forward, 8th grader, Norton Middle School, Norton, MA
A lengthy player with long arms, Woodason showed the ability to run the floor as a wingman and be strong rebounding on the low post.  His low post defense was superb as opposing big men could not get clean looks when trying to turn and use the glass to finish.