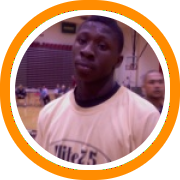 We continue our look back at the second annual New England Elite 75 Showcase with a look at who stood out on the gold team.

Geoffrey Grey
5’1”, Point Guard, 7th, Oak Hill Middle School
Gray is a 7th grade floor general with great point guard skills and a nice crossover move off the dribble.  He does a good job of keeping his head up and finding the open man and is always a threat to break down his defender off the bounce.

Zachary Holler
5’1”, Guard, 8th, Exeter Middle School
An 8th grade combo guard, Zach Holler plays with confidence. He dribbles well with both hands, makes smart decisions with the ball, and displayed a nice shooting touch with decent range.  He was at his best offensively in the mid-range are where his pull-up is a true weapon.

Jamir Henderson
5’7”, Guard, 8th, Concord Middle School
Simply quicker and more athletic than most opposing guards, Henderson is able to beat his man off the dribble and get to the rim almost at will.  But he’s also smart enough to take advantage of sagging defenders by creating space with his dribble to free himself for short pull-ups.

Johnny Little
5’6”, Shooting Guard, 8th, Day Middle School
Little is a shooting guard with good range who looks to shoot off the catch. He showed a good ability to free himself for open looks and then did a nice job of squaring to the rim and making the most out of his open looks.

Tyler Rowe
5’0”, Point Guard, 8th, East Hartford Middle School
Good things come in small packages with his quick point guard.  He does a great job of leading the offense and taking care of the ball and is a very smooth one-on-one player who consistently gets into the lane and finishes above bigger players with a nice floater.

Devasis Sharma
5’6”, Guard, 8th, Cameron Middle School
Sharma is a true combo-guard who can play both backcourt positions.  He does a good job of seeing the floor and taking care of the ball when it is in his hands but can also look for his shot from the wing.  Defensively, he works very hard and does a good job of pressuring the ball.

Nick Simonetti
6’0”, Small Forward, 8th, Dartmouth Middle School
A very talented all around swingman, Simonetti has outstanding athleticism and court awareness.  He is a smart player who moves without the ball, doesn’t take bad shots, and really gets out in fast break lanes to receive the ball and finish in transition.

D.J. Stewart
6’1”, Small Forward, 8th
Stewart is a small forward who is an excellent defender on and off the ball and gets a lot of deflections and steals. He is a tenacious rebounder, works very hard on both ends of the floor, and is able to consistently score off his dribble.

Aaron Falzon
6’5”, Power Forward, 8th, F.A. Day Middle School
Falzon is an 8th grade forward who showed a promising future with his already versatile offensive game. He can score in a number of ways, showed good back to the basket moves, a decent perimeter game, and the ability to face up.

Ryan O’Connell
5’6”, Guard, 7th, Wood Hill Middle School
A heady player with a high basketball I.Q., O’Connell did a great job of moving without the ball, was a sound ball-handler, a very hard worker, and aggressive defender.  He also showed decent range on his jumper, took good shots, and knocked down open looks.

Michael O’Connor
5’5”, Guard, 7th, Fessenden School
The quentisental point guard, O’Connor is a great team player who was able to do a little bit of everything for his squad on Saturday.  While he was very effective setting up his teammates, he also has a great shot of his own that he should continue to look for.

Mike McGovern
5’5”, Guard, 7th, R.J. Grey Jr. High School
A 7th grade combo guard, McGovern works hard on defense, pressuring the ball and hustling on every possession. He really came alive late in the day when he showed he could shoot, pass, and get his teammates open for good looks.

Noah Stebbins
5’10”, Guard, 8th, Biddeford Middle School
A talented offensive player, Stebbins has a good one on one game with a solid variety of moves off the dribble and to consistent jumper to match.  His coach credited him with being very coachable while his sureness with the basketball also stood out.

Nicholas Stevens
5’9”, Shooting Guard, 8th, Londonderry Middle School
Stevens is a hard-working player who hustles on every possession on both ends of the floor and was definitely the best defensive player on his team according to his coach because of his ability to pressure the basketball.

Kalead Thompson
Small Forward, 8th, Hartford Magnet
Thompson had an impressive day, showing his versatility and the ability to play all five positions. Thompson uses his wide body in the post and rebounds well at both ends of the floor, but also handles the ball well on the perimeter and made some spectacular passes.

Jeremy Miller
6’8”, Center, 8th, Pierce Middle School
Miller was held out of action due to illness but just his size alone was enough to stand out as he is definitely someone we will look forward to seeing in the very near future.

Tyree Robinson (pictured)
Forward, 8th, Talbot Middle School
A man among boys all day long, Robinson utilizes his strength and athleticism to make a series of plays above the rim.  He blocked numerous shots throughout the day, went to work on the boards at both ends of the floor, and drop-step-dunked on three different offensive possessions.

Zachary Radz
5’2”, Point Guard, 7th, Shaker Junior High School
The 7th grader is already a bit of a coach on the floor as he sees the floor well, makes good decisions, passes well, and sets his teammates up for open looks.  But he is also capable of putting points on the board himself as he gets the ball to the paint and makes shots from 18 feet and in.

Tremont Waters
5’0”, Point Guard, 6th, King Robinson
Waters is a jet quick young point guard who gets anywhere he wants on the court with the ball and is very active defensive applying ball pressure.  What may be most impressive was his ability to take care of the ball while playing at an attacking tempo.

Jesse Molin
5’4”, Shooting Guard, 7th, Granby Jr/Sr High School
Molin is a 7th grade off guard who works extremely hard at the defensive end. He did a good job getting in help position to stop dribble penetration.  Offensively, he was a well rounded skill set and solid fundamental base in the game.

Adam Torres
5’8”, Small Forward, 6th, Curley Middle School
A youngster who proved he was capable of playing with the big boys, Torres did a great job playing with a group of mostly older players then him.  He played bigger than he was inside the lane, grabbed several offensive rebounds, knocked down a couple of open threes, and made the extra pass.

Matthew Torrey
6’1”, Small Forward, 8th, Cheshire Academy
An 8th grader who was as talented as he was versatile, Torry has the size to produce in the paint but can also step to the perimeter and produce thanks to his high basketball I.Q., good movement away from the ball, and a very nice shot off both the catch and the dribble.

Ethan Webster-Zinn
5’11”, Center, 7th, Fessenden School
A intriguing low post presence, Webster-Zinn has a still growing frame to go along with a solid post game where he establishes real estate well, knows how to finish around the bucket, and also rebounds the ball in high volume.

Charlton White
5’8”, Point Guard, 8th, Endersuy
White is an impressive 8th grade point guard who is capable of creating his own offense at most times but elects to run the team, being extremely unselfish, sharing the ball, setting up his teammates and always playing hard.

Taylor White
6’0”, Small Forward, 8th, Shepaug Valley Middle School
A good sized swingman with an excellent fundamental base in the game White did a great job of catching, squaring up and shooting the ball with range.  He also had the quick release to match, making him a very difficult player to defend.

Tyree Weston
6’0”, Small Forward, 7th, Keither Middle School
A swingman who is still young but already has good size, strength, and athleticism, Weston has a gear beyond most others with a great first step to get to the hoop where he can absorb contact and finish consistently in traffic.

Jarred Reuter
6’7”, Power Forward, 8th, Rochester Junior High SChool
Reuter is an 8th grade phenom with post moves, footwork, and finishing ability well beyond his years.  He made several well executed low post moves but also took the ball off the defensive glass and led the break himself, and demonstrated a rapidly evolving perimeter game.